Congress never so diminished as it is now: Narendra Modi 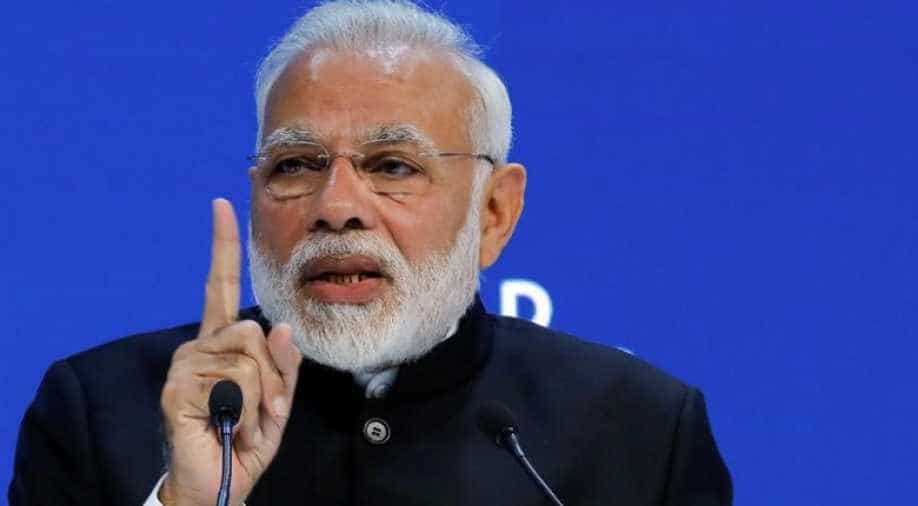 Prime Minister Narendra Modi on Saturday called the BJP's impressive performance in Tripura Assembly polls people's answer to "fear, lies and confusion" being spread against his government, and targeted the Congress, saying it was never so diminished as a party as it is now.

In an address to party workers at the BJP's newly constructed headquarters following the announcement of the polls results in Tripura, Nagaland and Meghalaya, Modi also took an apparent dig at Congress president Rahul Gandhi, saying some people grow in designation but shrink in stature.

In contrast, he said, BJP chief Amit Shah was marching ahead by leading the party to victories in many states.

The prime minister described Shah as the architect of the party's victories.

In remarks laced with sarcasm, Modi said he had recently told Puducherry Chief Minister V Narayanasamy that the Congress leader was lucky as he would soon become a "specimen of a Congress chief minister" after the party loses Karnataka, which goes to polls in April-May.

"I told him you are a most lucky person in the Congress. I told him that after June you will be a specimen for the Congress to highlight what it used to be. That it also used to have chief ministers and was in power. You will be such a specimen that they will carry you on their shoulders and dance saying it also has a chief minister," Modi said amid laughter.

Referring to Punjab Chief Minister Amarinder Singh, who heads the Congress government in the state, he said neither he nor they (Congress) consider each other their own. "He is a 'swatantra fauji' (independent soldier)," Modi said of Singh.

The prime minister said the people of the northeast had a sense of alienation but his government worked overtime to remove it.

Central ministers have spent more nights in one of these states to deal with their problems in the last four years than they did all the years earlier, he said.

"Fear, lies and confusion were being spread," he said, an apparent reference to the opposition's criticism of his government over a host of issues, and added now people have answered it through their votes.

When his government takes some actions, it is dubbed as vendetta, he said, apparently referring to criminal cases against some opposition leaders and their kin in corruption and other matters. But it is in fact "mandetta" as the people have given the mandate to act, he said.

In 'vastu shastra', Modi said, it is believed that the northeast corner is the most important part of a land and with his party now in power in most of this region, these states are leading the country on the path to development.

The prime minister charted his party's phenomenal rise in different parts of the country as from "no one to won".

With the Left accusing the BJP of using money and muscle power in its bastion of Tripura, Modi said opposition parties often did not concede defeats in a sportsman's spirit.

Amid a "disinformation" campaign, stories about the BJP's and its government's good works had reached far corners, he claimed and asked its leaders to work with a 360-degree approach for all-round development.

He also attributed the party's performance to its organisational work and local leaders, who, he said, are not highlighted in the media as they are not known much.

Modi took a brief pause when there was a call for prayers from a nearby mosque, and also paid respect along with the audience to deceased party workers, allegedly victims of political violence, by keeping silence for a while.

He said the BJP's win in Tripura was no ordinary victory and it was a journey from "shoonya to shikhara" (zero to peak).

The people of the Northeast supported his government's "Act East policy" and "politics of performance", he said.

He said BJP workers were victims of political violence in West Bengal, Kerala, Karnataka and now in Odisha too.

He was felicitated by senior party functionaries, including members of the BJP Parliamentary Board, headed by Shah.

The board also took stock of the party's performance in three states.

Shah has said that the board will meet soon to take a call on chief ministership of Tripura. Its state chief Biplab Kumar Deb is being seen as a front-runner for the job.

The CPI(M) lost in the polls in Tripura, where it was in power for the last 25 years.