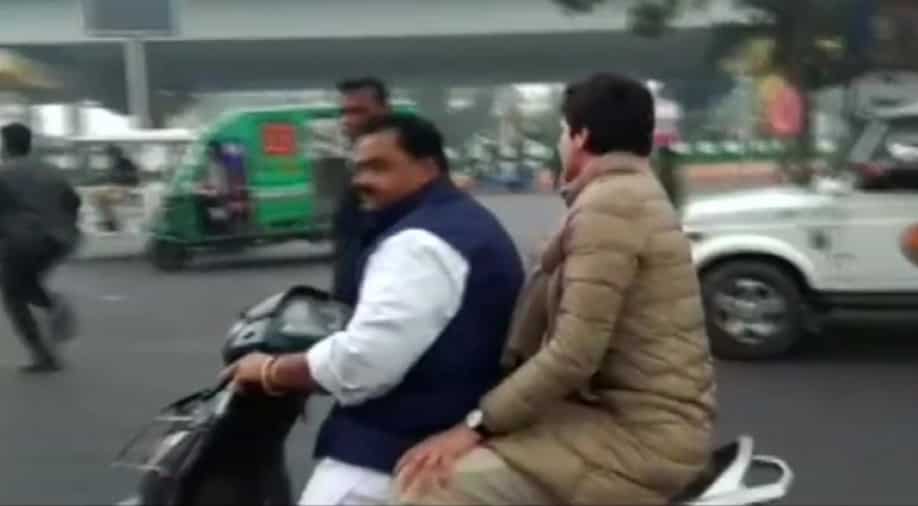 A challan of Rs 6,100 was imposed on the Congress leader

The CRPF on Monday blamed Congress General Secretary Priyanka Gandhi for security violation when a party leader rode her on a scooter in Lucknow.

CRPF further said "unscheduled movement" without intimation was done by Gandhi. They also said that security lapses on her part were communicated.

Earlier today, a Congress leader, who drove Priyanka Gandhi on a scooter, faced a fine of Rs 6,100 for breaking traffic rules as both leaders did not wear helmets.

On Saturday, Gandhi was stopped by a police personnel in Lucknow as she was on her way to meet the family members of former IPS officer SR Darapuri who was arrested for protesting against the Citizenship (Amendment) Act. Congress's Dheeraj Gurjar then rode Gandhi on a scooter to reach former IPS officer's residence.

Lucknow: The Congress party worker on whose two wheeler Priyanka Gandhi Vadra travelled while going to meet family members of Former IPS officer SR Darapuri yesterday, has been challaned with a penalty of Rs 6100 for not wearing helmets. (File pic) pic.twitter.com/LArpmx31UJ

A challan of Rs 6,100 was imposed on Gurjar by the Uttar Pradesh traffic police because both the party leaders were not wearing helmets.

Gandhi earlier claimed that she was "strangulated" and "manhandled" by a lady cop as she was on her way to meet the kin of former IPS officer.

"They (UP Police) surrounded me while I was going on a party worker's two-wheeler, after which I walked to reach there," Gandhi had said to mediapersons.

"I was walking (after the car was stopped). I was surrounded, strangulated. They pushed me ... by a woman police person. I fell down. They stopped me and then I went on the scooter of a party worker," she said.

The UP Police, however, has denied all the allegations.