Coast Guard ship ‘Varaha’ commissioned; Indian Coast Guard to get stronger by 67 vessels and 38 aircraft by 2025 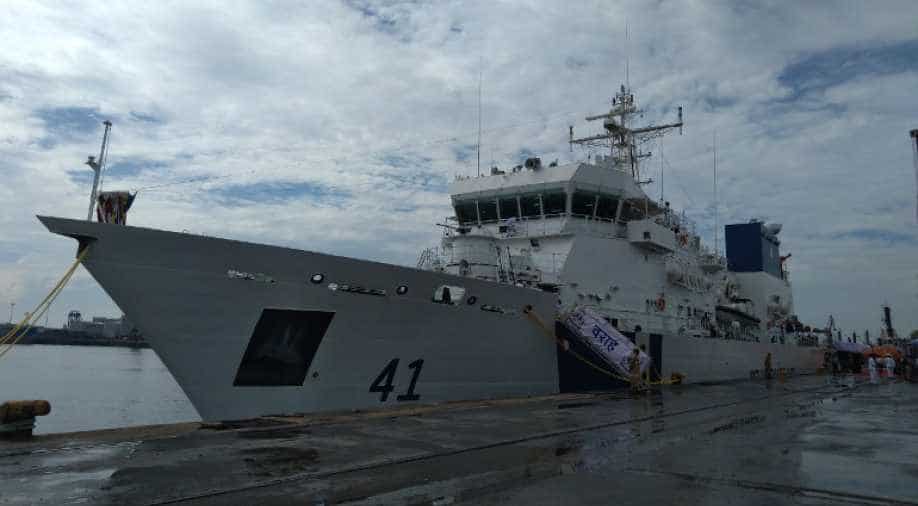 Varaha is the fourth in the series of seven 98m offshore patrol vessels.

Indian Coast Guard Ship Varaha (ICGS Varaha) was commissioned into service today by the Defence Minister Rajnath Singh, in the presence of Krishnaswamy Natarajan, Director General, Indian Coast Guard and other senior officials, at the Chennai Port. Varaha is planned to be based at New Mangalore under the administrative and Operation control of Commander Coast Guard Region (West). The ship has a complement of 14 officers and 89 men and is commanded by Commandant Dushyant Kumar

‘Varaha' is the fourth ship in the series of seven 98-meter offshore patrol vessels(OPV) that are being built. The name Varaha has its roots in Indian mythology, where Lord Vishnu in his third incarnation took the form of a boar to rescue goddess earth from the ocean, by lifting her on his tusks. The ship has been indigenously designed and built by Larsen and Toubro(L&T). 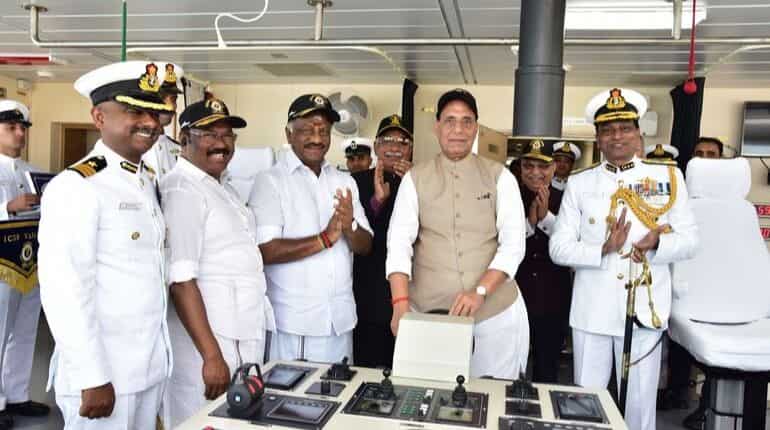 Speaking at the event, JD Patil, Director, L&T Shipbuilding said, “the fourth OPV is the 50th Coast Guard vessel designed and developed by L&T in Chennai. The three ships prior to Varaha were also delivered to the Coast Guard ahead of the contract schedule and we are sure that the remaining three vessels will also be delivered ahead. of schedule.”

Addressing the Officers, Krishnaswamy Natarajan, Director General, Indian Coast Guard said, “coast guard had a humble beginning in 1977 as the Marine wing of Customs and today we have become a force with 142 ships, boats and 62 aircraft for patrolling India’s Exclusive Economic Zone(EEZ) and close coast patrol. Our Coast Guard stands larger than many navies in the world and we further plan to boost our assets to 200 vessels and 100 aircraft by 2025. We also have bilateral and multilateral agreements with Sri Lanka, Bangladesh, Mauritius, Seychelles, Maldives etc. Daily we deploy 30-40 ships and 10-12 aircraft for surveillance and in the last decade we have saved over 10,000 lives, in over 3100 missions against the fury of nature.”

“Varaha has ultra-advanced navigation, communication and sensors. The OPV will be based out of Mangalore and will be covering our EEZ up to Kanyakumari and Lakshadweep The ship also carries the Advanced Light Helicopter(ALH) that is indigenously developed by Hindustan Aeronautics Limited(HAL). Not many countries in the world produce a wide range of assets from Fast Attack Craft to Aircraft Carriers, this showcases the significance of the Make in India initiative and collaboration with private players”, said Defence Minister Rajnath Singh. The Minister recalled how the tradition of shipbuilding was not new to India and traced its roots to the Indus Valley Civilization. He added that the Chola empire that had established significant maritime trade ties with South and South East Asia.

She is armed with a 30mm gun and is to be fitted with the 12.7mm gun with Fire Control System(FCS). The 2100-ton displacing ship is propelled by two 9100Kw engines and can reach top speeds of 26knots and has an endurance of 5000 nautical miles, with the ability to stay at sea for 20 days without replenishment. It has been designed to carry one twin-engine light helicopter in the hangar and twin-engine heavy helicopter on deck, both of which have night-flying capabilities. Having helicopters on board extends the ship’s range by about 100 miles, while its radars have a range of 96miles.

Sources told WION that Varaha is among the fleet of ships that are based on a wholly digitally designed, indigenous model on which various ergonomic studies were conducted to ensure that they are extremely stable even in inclement weather, with minimum roll and pitch. In the earlier era, detailed ship drawings had to be made on tables that were as long as three dining tables and then the engineers would have to work on the models, whereas now it has all been computerized.