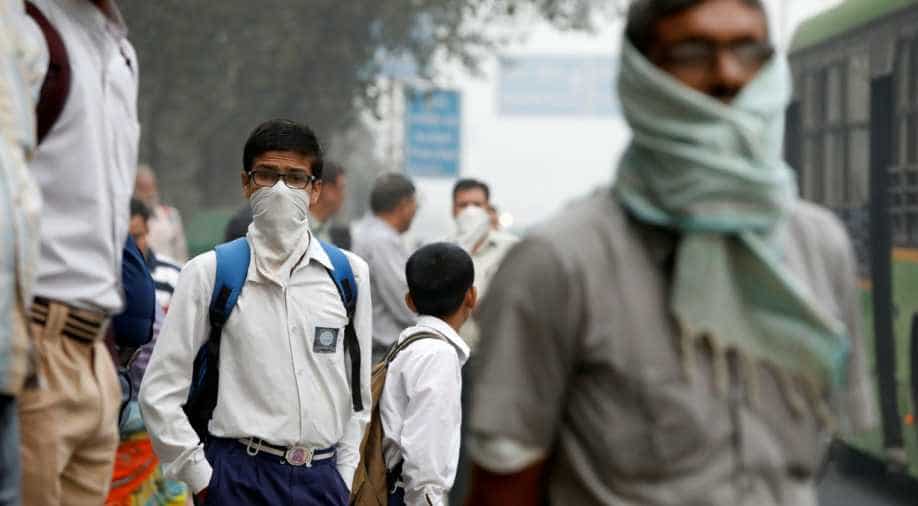 'Why don't you close schools whenever the particulate matter levels are found to be beyond 900 microgram per cubic meter. Ask the schools to run on Saturday and Sunday if required,' the tribunal said. Photograph:( Reuters )

The National Green Tribunal today directed the Delhi government to consider shutting schools whenever air quality touches emergency levels to save the children from inhaling pollutants.

A bench headed by NGT Chairperson Justice Swatanter Kumar asked the AAP government to look into this aspect and incorporate it in its action plan to deal with the problem of air pollution.

"Why don't you close schools whenever the particulate matter levels are found to be beyond 900 microgram per cubic meter. Ask the schools to run on Saturday and Sunday if required," the bench observed.

Advocate Tarunvir Singh Khehar, appearing for the Delhi government, said that this was difficult to implement because the children will have to suffer academically.

He said that air quality is bad in winter season for three months and if schools are closed during this period it would be difficult to complete their syllabus and examinations will have to be postponed.

The bench, however, expressed dissatisfaction and said, "You don't do your duty and now you are giving reasons. You are spoiling the lives of children. Infants are taking antibiotics in Delhi. Why should they suffer?

"In the last 12 years, the Delhi government has not taken a single step to bring down the ambient air quality within permissible limits. If the lungs of children are affected today, imagine the disease they will have after 20 years," it said while directing it to consider the suggestion.

The NGT also rapped the AAP government for not installing air purifier in government schools as per its earlier direction.

During the proceedings, the Delhi government submitted its action plan for the period when air quality touches emergency levels which it divided in three categories dealing with different levels of pollution.

The NGT said that it would pass a detailed order on ways to handle air pollution after perusing the action plans submitted by the Haryana, Delhi, Rajasthan, Punjab and Uttar Pradesh governments.

The tribunal had on December 6 slammed the AAP government and the neighbouring states over their action plan on ways to deal with severe air pollution in the city and directed them to file a detailed document to tackle the problem.

It had observed that air pollution was never at "normal level" in the national capital and directed the neighbouring states of Punjab, Haryana, UP and Rajasthan to file the action plan afresh.