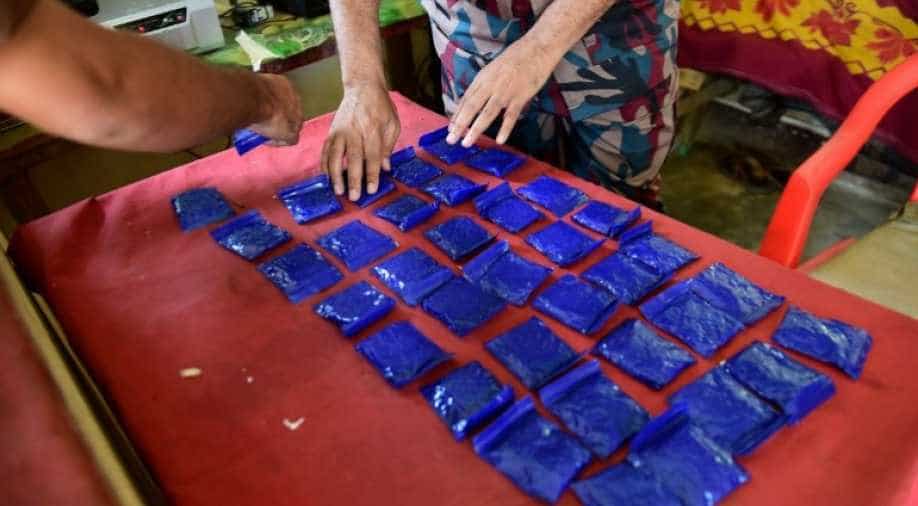 A Bangladesh Border Guard (BGB) laying out small bags of the drug 'yaba' recovered from a passenger bus in a search at a checkpost. Photograph:( AFP )

China should rein in the methamphetamine-producing militias under its influence in eastern Myanmar and stem the flow of precursor chemicals fuelling the multi-billion-dollar drug trade, a report Tuesday said.

The country's restive eastern borderlands have hosted a flourishing narcotics trade for decades as the key producer in the lawless Golden Triangle, which also comprises areas of China, Laos, and Thailand.

But many drugs networks have in recent years switched to synthetic methamphetamine pills - known regionally as "yaba", Thai for "crazy medicine" - and crystal meth or "ice", a much more potent and addictive version that is smoked or injected.

Various militias provide a safe haven for the booming industry, while precursor chemicals flow over the border from China, conflict specialist NGO International Crisis Group (ICG) said in a report.

Drug production and profits are now so vast that they "dwarf" the formal sector in Shan State and are at the "centre of its political economy", the report added.

The NGO urged China to "crack down" on the illegal trade of precursors across its southwestern border, where it said traffickers have been given free reign.

China should also "use its influence over the Wa and Mongla armed groups controlling enclaves on the Chinese border to end their involvement in the drug trade", the report said, referring to two of Myanmar's most powerful warlord-run ethnic groups, widely seen as the region's key narcotics producers.

Several billion dollars are estimated to be made each year in Myanmar for crystal meth, the ICG said, with Japan and Australia offering the highest street prices in the world.

A tonne has a wholesale value in Australia of at least $ 180 million and street prices several times higher.

Crystal meth is worth more than heroin gram-for-gram, the report said. The narcotic is also exported to China, South Korea, and New Zealand - often in branded tea packets - as the trade becomes "increasingly professionalised" and "dominated by transnational criminal syndicates operating at huge scale".

China's success in clamping down on its own illegal meth labs has pushed the drug networks over the border, with Australian biker gangs providing regional smuggling networks, the report said.

Meanwhile, regional prices for yaba have collapsed to the lowest prices in decades as producers dump huge quantities of Southeast Asia's favourite high on the market.