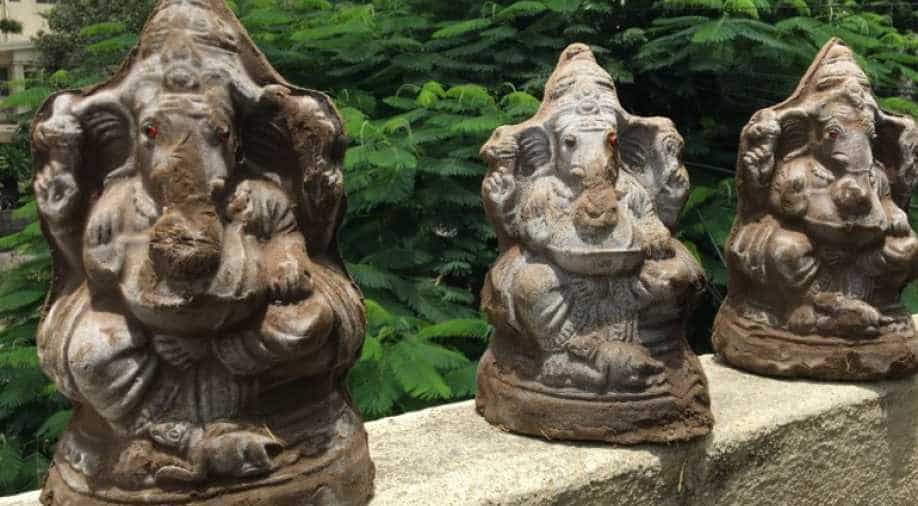 After the prayers and festivities, these 9-inch tall idols can be lowered into flower pots or small pits in the soil and when watered regularly until they dissolve, the seeds sprout and what was once the Ganesha idol becomes the same with the environment, leaving no trace

A Chennai-based NGO Sevalaya has come up with the concept of ‘Seed Ganesha’, which is just like any other Ganesha idol made of clay, but is mixed with vermicompost and has few seeds embedded in it. Unlike its clay and Plaster-of-Paris (PoP) counterparts, this one need not be dumped in water bodies or the beaches.

After the prayers and festivities, these 9-inch tall idols can be lowered into flower pots or small pits in the soil and when watered regularly until they dissolve, the seeds sprout and what was once the Ganesha idol becomes the same with the environment, leaving no trace.

Speaking to WION on the idea behind the project, V Muralidharan, Founder and Managing Trustee, Sevalaya said, “During Ganesh Puja a lot of people dump the Ganesha idols in the water bodies and end up polluting them, so we wanted to ensure that people kept the idol at home, instead of dumping it. So we came up with an idea where we can have a clay Ganesha with seeds embedded in it so that it can be kept in a pot, when watered regularly the plant grows. This way we are growing a plant every year and doing a great service by not disposing of the idols.”

“We source the clay, seeds and vermicompost from our organic farm and are able to produce hundreds of idols that sprout into plants such as tulsi, papaya, leafy greens, ladies finger etc. The idols are also made by the villagers who live near our organic farm”, said R. Ganesh, Associate Vice President Sevalaya.

While such small initiatives do make a positive impact, most of the widely used idols are made of clay or Plaster of Paris (PoP) with a generous coat of glossy paints and end up being dumped or immersed in the nearby rivers, lakes and beaches.

Speaking to WION on the impact of the dumping of idols into water bodies, Arun Krishnamurthy, Founder, Environmentalist Foundation of India said, “We are dumping harmful waste (Plaster of Paris) into the waters and it will have a long-term ill effect and will keep releasing chemicals for a long time. It contaminates the groundwater and affects the biodiversity in the region.”

"Even when it comes to clay idols, when we extract clay from a certain lake or pond and make idols out of it, the idols should be immersed in same water body from where the clay was extracted. It is important to keep in mind that while embracing and celebrating our culture, we must always keep the traditions intact and live in harmony with nature, " he added.