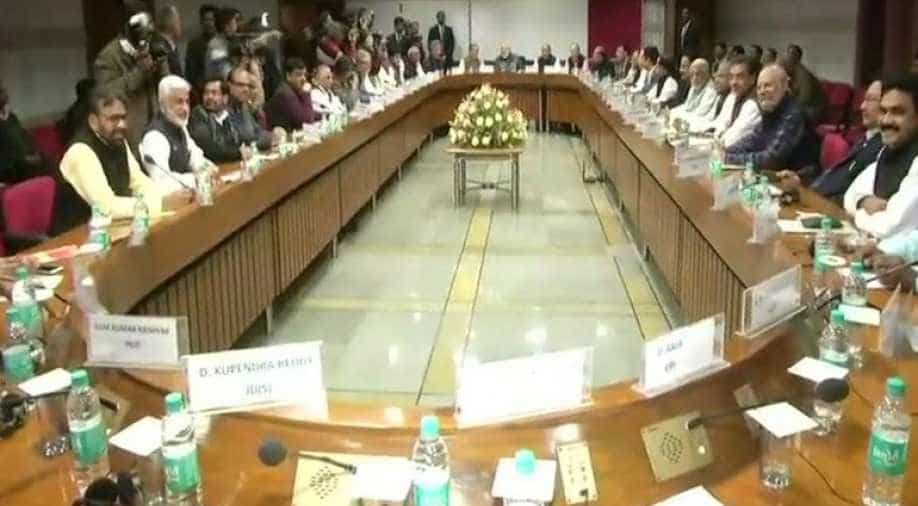 Ahead of Monday's Budget Session, the government met leaders of different political parties in Parliament house on Sunday and discussed issues and sought cooperation in the proposed legislation.

The meeting was attended by Prime Minister Narendra Modi, union ministers Rajnath Singh, Arun Jaitley and Ananth Kumar, besides leaders of the opposition and other parties.

Parliamentary Affairs Minister Ananth Kumar termed the all-party meeting "fruitful" and said that the government will do everything possible to ensure the passage of the bill in the Budget Session.

We hope the Triple Talaq Bill is passed in Rajya Sabha too. My colleagues & I will leave no stone unturned in talking to and convincing the political parties. The way they have passed GST unanimously, we request them to pass this too unanimously: Ananth Kumar pic.twitter.com/Yzi2rlF9fZ

Kanimozhi of DMK also said "we'll continue to demand that Triple Talaq Bill be referred to select committee for deliberation upon some of its contentious clauses. We'll also raise Ockhi fishermen issue, NEET issue & Women's Reservation Bill which has not been listed in the business advisory."

Unemployment is rising. Peace & harmony is being driven out & violence being spread. Nation's unity is in danger. From Koregaon to Nandangaon to Buxar, Dalits are being oppressed. We raised these issues. We will also raise issues of farmers suicide: Jay Prakash Narayan Yadav, RJD pic.twitter.com/j6wrwXFXJJ

The budget session of the parliament will begin from January 29 and it will end on April 6.

The session will start with President Ram Nath Kovind's addressing a joint sitting of the two houses.

The much-awaited economic survey will also be presented on the day 1 of the budget session.

The phase 1 of the session will be held from January 29 to February 9. The second phase will take place from March 5 to April 6.

The budget will be tabled by finance minister Arun Jaitley on February 1, making it a first budget to be presented after Goods and Services Tax implementation.

The most important bills of this session would be the commission for backward classes and Triple Talaq bill, which was passed in Lok Sabha but was stalled in the Rajya Sabha.