BRICS can set example for the rest of the world: Brazilian envoy 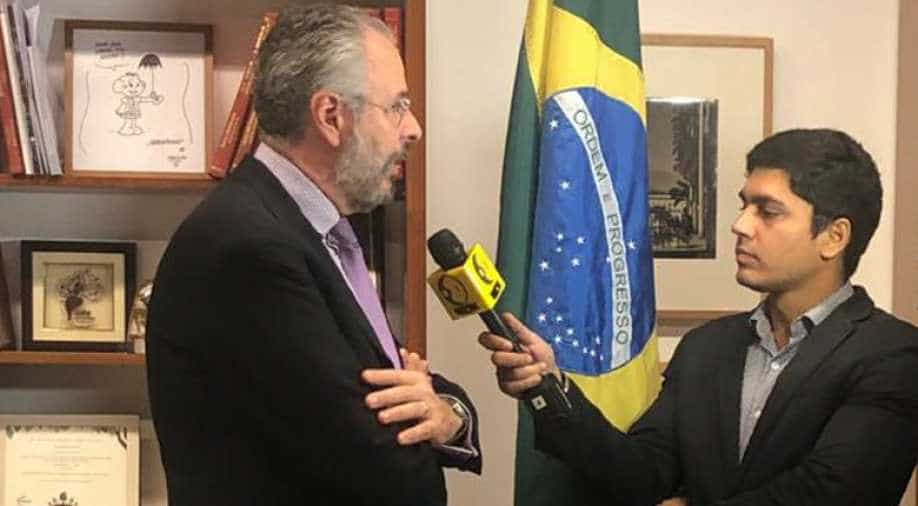 Brazil is all set to host this year's BRICS summit which will see Indian PM Modi participating. Speaking to our diplomatic correspondent Sidhant Sibal, Brazilian envoy to India Andre Aranha Correa Do Lago said one of the key objectives of the summit will be innovation and how these five countries - India, Brazil, China, Russia and South Africa can work together and set an example for the world.

WION: What will be the main agenda of the BRICS summit?

Andre Aranha Correa Do Lago: We are very happy to host the summit, this is the 11th BRICS summit and what really Brazil thinks is very important, its economic growth, innovation and technology for the future, which is an important objective. There are different things happening in the world, but we have to focus on this, how much these countries can get together and this can improve things and economic growth, science, technology and innovation.

WION: How much global growth can be part of the talks, since BRICS is a grouping based on economic issues?

Andre Aranha Correa Do Lago: As you know, we have very different circumstances, India has been growing very strongly, as well as China but Russia, Brazil, South Africa have been growing through more difficult times with much less significant percentage of growth.

What we know, we are all living in a world full of uncertainties and since these economies got together in the group,  because of our economic significance, we have to show we have lines that we follow and that their things to show what can be done between us and that can be example for rest of the world.

WION: Are you planning to call other Latin American countries?

Andre Aranha Correa Do Lago: In this BRICS summit, the Brazilian government decided not to call anybody else, just five leaders and somehow we want to concentrate on the leadership of the five countries.

It will also be a celebration because one doesn't notice but during the process of presidency of BRICS we had several meetings. This year we organising over 90 government meetings, 17 at the level of ministers and also 15 people-to-people meet which is a great achievement. BRICS institutions coming together.

The summit is not something to be looked at in isolation, it is in fact, the symbolic end of engagements.

Andre Aranha Correa Do Lago: The relationship is getting stronger, and you have to think of one element, which is forgotten, the most important new groups formed recently to try to solve some of the difficulties we have in multilateral, basically BRICS formed to deal with economics and trade regarding the IMF, WTO but we have also we have the group G4 to deal the UN issues.

In G4, we have India with Brazil, and then IBSA that concentrates on south-south cooperation and has big democracies in three different continents and it is being preceded by India this year. SO whatever geometry we choose to try to overcome the difficulties of traditional structure, India and Brazil are always together.

WION: Any high-level visits in the offing from Brazil to India?

Andre Aranha Correa Do Lago: I hope so. As you know reports of things that can happen, the fact this is a very good moment for the relationship and there is a very good understanding between our leaders in the Osaka G20 meet and it has continued.

We all know how important it is to have a special relationship between the leaders and will be good to have more high-level visits.

WION: What is your take on UN reforms?

Andre Aranha Correa Do Lago: Well, I hope yes. As a Brazilian diplomat I have believe in the United Nations and both India and Brazil want to work with the UN, we don't want to reduce the strength of the UN.

But the world has changed since 1945 and no doubt reforms are needed. It is a complex process and we have to remember, their can't be reforms without considering India and Brazil, this is the main message and the reform should reduce us.