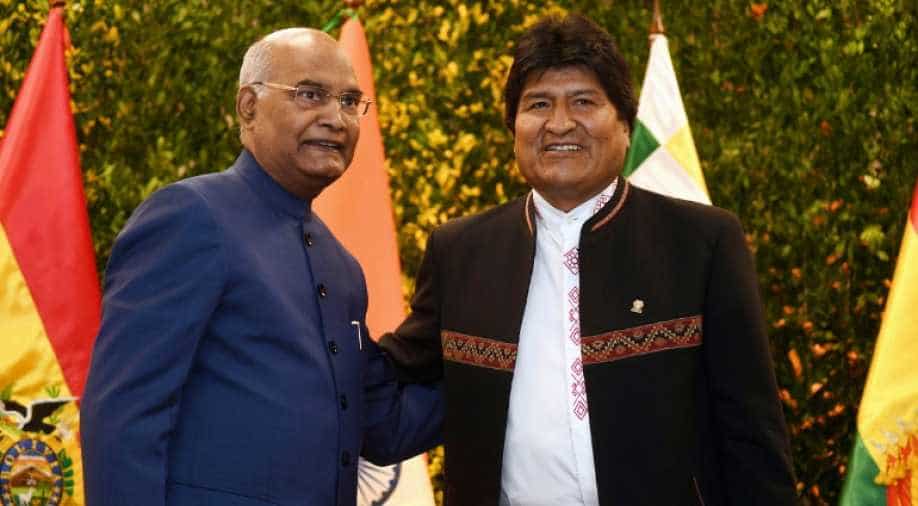 President's visit to Bolivia was the first-ever presidential-level visit to the Latin American country since the establishment of diplomatic ties.

President Ram Nath Kovind who is on a three-day visit to Bolivia held wide-ranging talks with his counterpart Evo Morales on a number of bilateral issues such as the economy, terrorism, UN Security Council reforms and climate change.

During the bilateral talks between both Presidents, Bolivia extended its support for India's membership as a non-permanent member of United Nations Security Council.

"There was an acknowledgement that current membership of UNSC is not reflective of realities of the twenty-first century and President Evo Morales expressed full understanding of India's aspiration to be a member of UNSC. He extended support for India's membership as a non-permanent member," Vijay Thakur Singh, Secretary of Ministry of Exrernal Affairs said on Saturday.

Bolivian President also condemned the Pulwama terror attack in which over 40 CRPF personnel were killed in Jammu and Kashmir.

"Bolivian President strongly condemned Pulwama attack and denounced cross border terrorism. There was an assertion that terrorism in all its forms constitutes a threat to humanity," Singh added in the press briefing in the national capital.

The President is on a three-nation tour to strengthen India's ties in key sectors such as trade, investment and renewable energy. He was in Croatia from March 25-28.

On March 30, he will head to Chile to hold talks with his Chilean counterpart Sebastian Piera.

President's visit to Bolivia was the first-ever presidential-level visit to the Latin American country since the establishment of diplomatic ties.

External Affairs Ministry Spokesperson Raveesh Kumar said in a tweet, "In first ever Presidential level visit between India and Bolivia wide ranging discussions were held between #PresidentKovind and Bolivian President Evo Morales on political economic and cultural issues including space, mining, IT, pharmaceutical and traditional medicines".

Kovind, during his three-day visit to Bolivia, will also participate in an India-Bolivia business meet, address university students and interact with the Indian community.