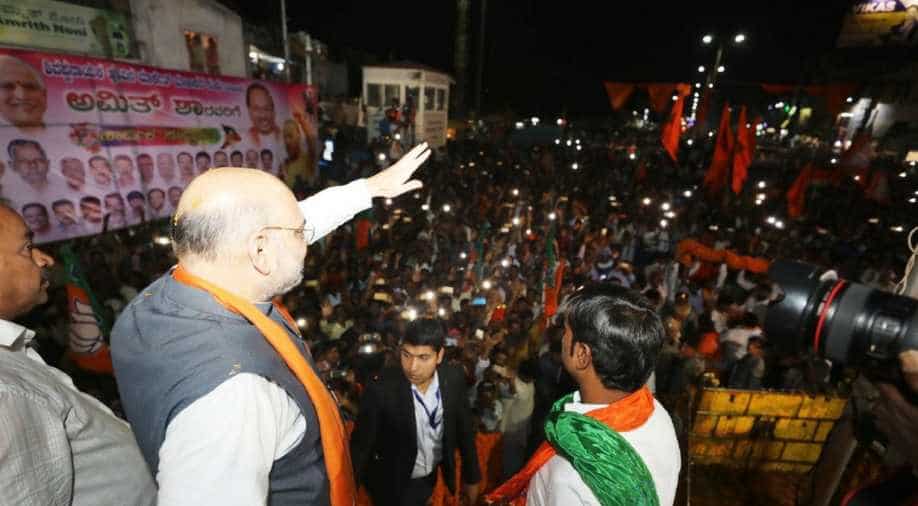 BJP President Amit Shah today asserted there was a "tsunami" in favour of his party which will not only defeat the ruling Congress but also 'uproot' it in the coming assembly polls in Karnataka.

He also lashed out at the Siddaramaiah government on multiple fronts, saying it had distanced itself from the people.

With this sea of humanity on the streets of Shivamogga, the Congress central leadership and CM Siddaramaiah can itself feel the Tsunami of BJP in Karnataka. The countdown of the corrupt Siddaramaiah government has begun. pic.twitter.com/QfD6mCDyar

"After Gujarat elections, this is my Karnataka trip. Extraordinary enthusiasm is witnessed here. Earlier I was saying it was a BJP wave. Now I say it's a BJP tsunami" Shah said.

He was addressing a public rally here in the home district of state unit BJP chief BS Yeddyurappa, who is being projected as the party's chief ministerial face in the elections to be held in the next couple of months.

Shah, who began a two-day tour of the central Karnataka region, said in five years the Siddaramaiah government had "distanced itself from people and development."

Coming to Karnataka a day after Congress president Rahul Gandhi ended his fourth round of visit, he said "Rahul Gandhi is touring. He has been saying that Congress government will come in Karnataka."

"Since 2014 see the election records," he added citing BJP's winning streak since coming to power at the centre.

Few more pictures from the roadshow in Shivamogga, Karnataka. pic.twitter.com/STNlbgut4u

"This vijayarath of Modi has reached Karnataka. What will happen? We will not only defeat them, we will uproot Congress," he declared.

Shah alleged that in the last four and a half years, 20 BJP/RSS workers had been killed in Karnataka by Popular Front of India activists.

PFI had earlier rejected the BJP's repeated charge about its involvement in the killings.

"But it's not reaching people in Karnataka. Modi government is like high tension line. To draw power from it directly is not possible. You need a transformer. However, the transformer of Siddaramaiah government is burnt. Such transformer should be removed," he said.

Speaking at Tiptur in Tumakuru district earlier, Shah maintained that the Siddaramaiah government's move to accord separate religious minority status to Lingayats and Veerashaiva Lingayats was aimed at preventing Yeddyurappa from becoming the Chief Minister.

"This Siddaramaiah government has brought this proposal, not because it has love for Lingayats, but to prevent Yeddyurappa from becoming Chief Minister," he said addressing a Coconut Growers Convention.

"I want to tell Karnataka people that if BJP wins a majority, we will make Yeddyurappa Chief Minister," he added.

Yeddyurappa is considered a Lingayat strongman.

The state cabinet had recently decided to recommend to the Centre grant of religious minority status to Lingayats and Veerashaiva Lingayats, in a move seen as an attempt to chip away at the BJP's strong Lingayat voter base.

Shah said that the proposal, which was rejected by the then Manmohan Singh government at the Centre in 2013, was only aimed at creating confusion among people.

He, however, believed that the people of the state would not be enticed by Siddaramaiah's "divide-and-rule politics." Rahul Gandhi should first point fingers at Siddaramaiah for dividing people before accusing BJP of it, Shah said.

Accusing Siddaramiah of playing "divide-and-rule" politics, he likened it to that of the British.

"The Congress ship is sinking and to save it, the Congress is making its last efforts, and what it is doing? It is making efforts to divide people," he charged and questioned why the Siddaramiah government had not made the proposal earlier.

He also launched a scathing attack on the state government for "failure" to prevent farmers' suicides. "In five years of Siddaramaiah's rule as many as 3,781 farmers committed suicides. I want to ask the government, who is responsible for these suicides?" Shah said.

Shah also held a massive roadshow in Shivamogga, where he launched the state BJP's "Karunadu Jagruti Yatre", a rally to awaken the electorate of Karnataka against the "misrule" of the Siddaramaiah government.

The BJP president began his two-day tour by seeking blessings of Sri Shivakumara Swami of Siddhaganga Mutt in Tumakuru, a revered seer of the Lingayat community.

Shah's meeting with the seer is being seen as an attempt to reach out to the Lingayats/Veeshaivas, who are numerically and politically powerful in the state and form a major vote base for the BJP.

"Today I had the good fortune to seek blessings from the 'Walking God' Sri Sri Sri Shivakumara Swamiji of Siddhaganga Mutt, Tumakuru. His tireless work even at his advanced age is inspiring. His life is a living lesson and guiding light for all of us," Shah said in a tweet.