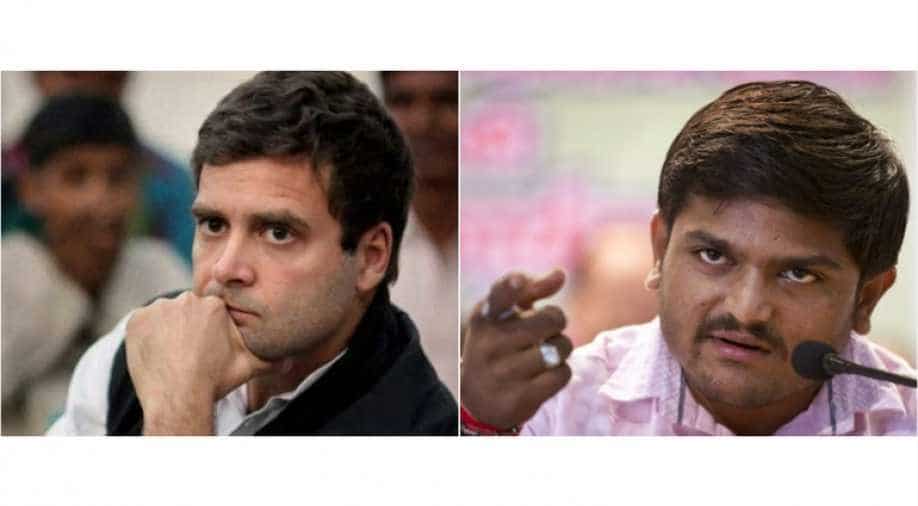 As soon as Hardik slid towards Congress, some Congress leaders began suspecting whether there was any secret deal (to include Patels in the OBC category). Photograph:( Zee News Network )

The BJP in poll-bound Gujarat today asked Patidar leader Hardik Patel and the Congress to clarify their positions after senior Congress leader Mohansinh Rathwa said it is not possible to carve out a quota for the Patidar community in the existing 49 per cent reservations.

Rathwa, Leader of Opposition in the Assembly, made the statement at a rally before party vice president Rahul Gandhi's arrival at the tribal-dominated Nana Pondha village in Valsad district yesterday.

"Patidars will be given reservation without interfering with the current quota of 49 per cent. There will not be any change in the current quota. If we give reservation, it has to be outside that quota," said Rathwa, a tribal leader and the senior-most Congress MLA in the state.

"Rathwa spoke his mind. Now both Hardik and Congress need to clarify their stands, as Hardik only wanted reservation under the OBC quota, not under EBC (economically backward classes) category which was offered by the Congress. But opposition leaders are mum about granting the OBC status to Patels," Rupala said, speaking to reporters here.

"As soon as Hardik slid towards Congress, some Congress leaders began suspecting whether there was any secret deal (to include Patels in the OBC category). After Rathwa's remarks, the Congress should clarify how it would grant reservation to Patidars under the existing OBC quota," he said.

Earlier this week, members of Hardik Patel-led Patidar Anamat Andolan Samiti (PAAS) and the Congress held a meeting and announced that an agreement has been reached on four main demands of the community. But there wasn't a final agreement on the key demand of the reservation yet, they said.

PAAS leaders said they will hold another round of discussions with the Congress by November 7.

Earlier, the Gujarat Congress had promised a 20 per cent reservation under the EBC quota to non-reserved communities including Patels if the party came to power.

"The fact is, the Congress never said anything about OBC reservations. They only talk about EBC quota. The Gujarat government has already given a 10 per cent quota in EBC. It is now quite clear that the Congress is trying to mislead Patidars with such vague promises," said Rupala.