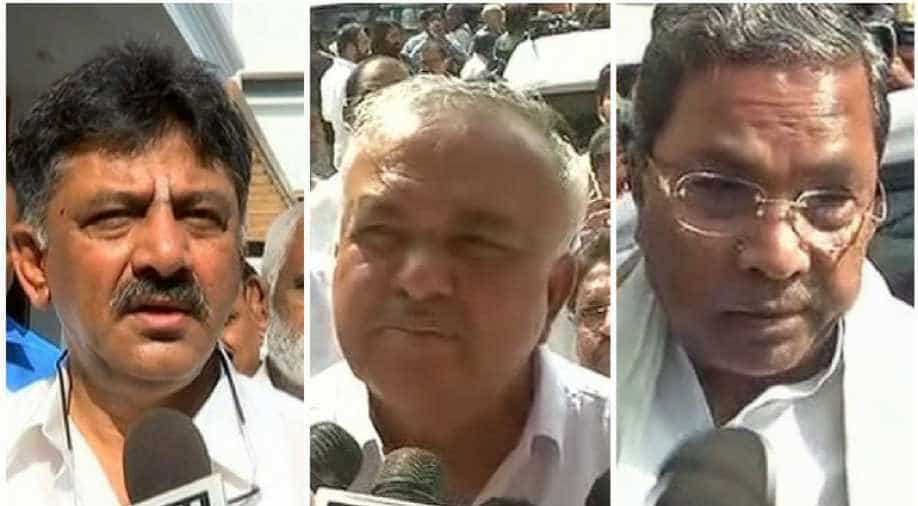 As Karnataka's political scenario gets intensive, the state's Congress Party leaders have alleged that the Bharatiya Janata Party (BJP) is trying to "poach" their MLAs in an attempt to establish majority to form the government in Karnataka.

"They (BJP) are poaching our MLAs, and we know that. Every day, there is a lot of pressure. But it not so easy, as two parties have the necessary numbers. However, we are taking all necessary steps," said Congress leader DK Shivakumar.

On being asked whether Congress MLAs in Karnataka would be shifted elsewhere, Shivakumar claimed that a plan has been chalked out to safeguard the former.

Echoing a similar stance, another Congress leader, Ramalinga Reddy, also claimed that the BJP was "trying hard" to get his party MLAs on their side.

"We believe in all our MLAs. BJP is trying hard to get them. They don't believe in democracy they just want power. All the people are happy, nobody is unhappy here," he said.

Meanwhile, outgoing Chief Minister Siddaramaiah re-iterated that the Congress-Janata Dal (Secular) alliance would form the government in the state.

"All the Congress MLAs are intact. Nobody is missing. We are confident of forming the government," he told reporters here, prior to the Congress party meeting at the Karnataka Pradesh Congress Committee (KPCC) office.

Results of the Karnataka Assembly polls announced on Tuesday evening showed that the BJP won 104 seats, emerging as the single largest party, while the Congress and JD (S) bagged 78 and 37 seats, respectively.

Soon after, the Congress announced that it would support the JD (S), taking their total seat share to 117, thus resulting in a fractured mandate.

As the results of the poll in the state have left the assembly in hung, the final decision will be taken by the Governor, Vajubhai Rudabhai Vala.

On a related note, JD(S) MLAs have gathered to attend the legislative party meeting, which is expected to begin shortly.