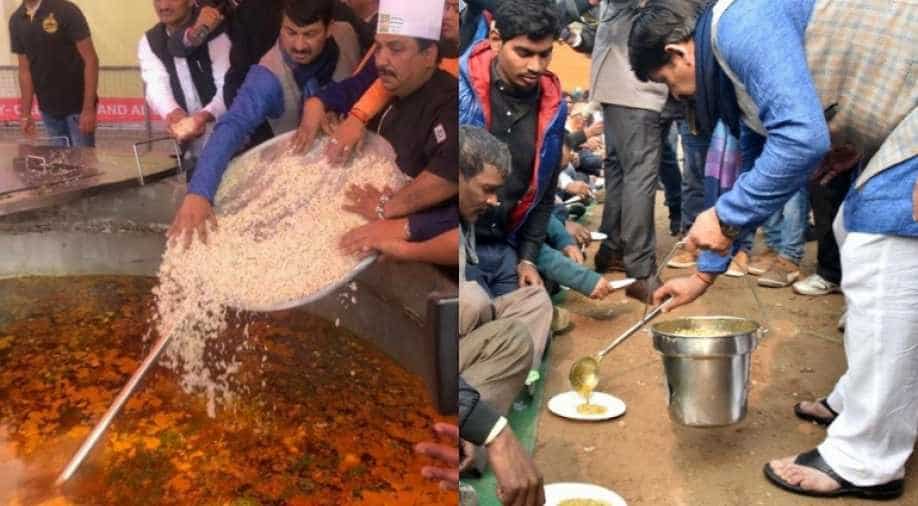 Rice and lentils for the khichdi have been collected from 3 lakh Dalit households. (Photo Courtesy: twitter.com/BJP4Delhi) Photograph:( Twitter )

The party leaders claimed that almost 5000 kilogram of khichdi was prepared and served on the occasion.

The BJP, in order to connect with Dalits, hosted a grand khichdi feast at the Ramlila Maidan on Sunday where 5,000 kg of "samrasta khichdi" was cooked and served as part of its "Bhim Mahasangam" programme, party leaders said.

The event was a gathering of people from backward classes and was organised by the Delhi BJP.

BJP MP and Dalit leader Udit Raj, however, was conspicuous by his absence at the event, but the party leaders said not too much should be read into his absence.

The party leaders claimed that almost 5000 kilogram of khichdi was prepared and served on the occasion.

The 5,000-kg "samrasta khichdi" was cooked in one utensil, with rice and lentils collected from around three lakh Dalit households in the national capital with an aim to set a world record.

Chef Vishnu Manohar from Nagpur, who had earlier attempted a world record by preparing 3000 kilogram of khichdi in Nagpur, prepared the khichdi in a single vessel.

"I want khichdi to be declared the national food of India. Every country has its dish - sushi is of China, pizza of Italy, but India does not have its own dish.

"I have come to Delhi so that the central government here hears me out. Khichdi is something that is eaten in 80 per cent of the households in the evening. The rich also eat it because they do not want to eat oily stuff while the poor also eat it," Manohar said.

"The representatives from the Guiness Book of World Records were here and 5,000 kilogram of khichdi was prepared which was eaten by 25,000 persons," he said.

Cries of Jai Bhim, Jai Hind, Bharat Mata ki Jai resonated at the Ramlila Maidan where party leaders said the event was more of a "harmony-building" exercise rather than a political event to garner votes ahead of the Lok Sabha elections.

"The dal and rice for this event has been collected from three lakh households and if they were not happy with us they would not have contributed. This khichdi has the message that Narendra Modi will again become the Prime Minister," he said.

Taking a dig at the Congress and the Aam Aadmi Party, he said, "Arvind Kejriwal and Rahul Gandhi, are you upset about the event? We had even invited every political party to be a part of the event."

"If they were concerned about harmony, Mamata Banerjee, Kejriwal, and others would have come," he said.

Union Minister Thawarchand Gehlot said BR Ambedkar was a patriot who returned to his country to work towards removing disparity.

"He spent his entire life on creating an atmosphere of harmony. He was a patriot. If he was not a patriot, he would not have come back to India despite being educated abroad where he also had the option of getting high-paying jobs.

"He came back to India but did not opt for a highly-paid job, instead he chose to work towards removing disparities," Gehlot said.

Union Minister Harsh Vardhan said by collecting a handful of rice and half a handful of lentils, the Delhi BJP is sending out a strong message of 'unity in diversity'.

He said it was a befitting reply to those who divide the country on the basis of caste, region and religion.

When asked about Udit Raj's absence and whether it is a sign of disharmony in the party, he said, "Can't you see many Dalit leaders here? If someone has come or not come, I would not know."

"There are many Dalit leaders and workers. Senior Cabinet Minister Thawarchand Gehlot is here. You draw meanings at your own convenience, " Vardhan said.