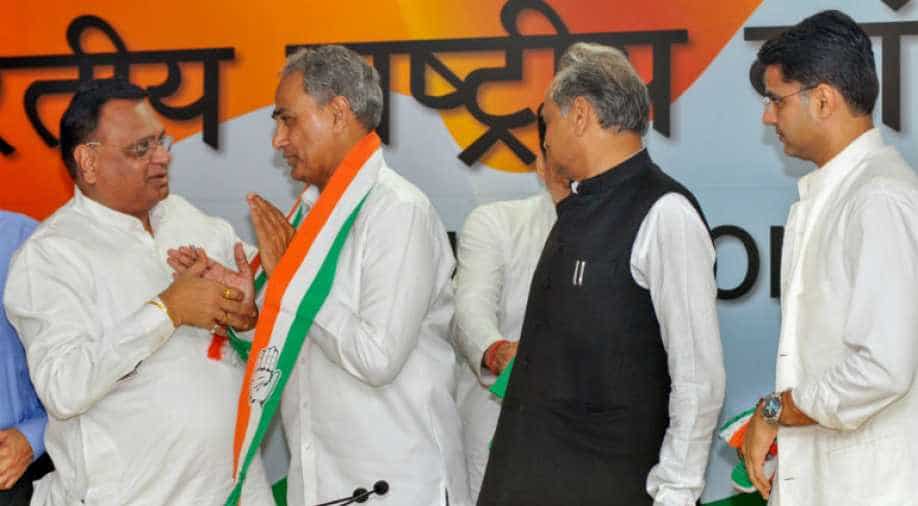 The ruling BJP alone has fielded seven defectors, including six from the Congress and one from the BSP.

The ruling BJP and the Congress in Rajasthan have fielded 11 turncoats for the December 7 Assembly polls, hoping that the "parachute" candidates will shine for them in the elections.

Voices of dissent are being heard from both parties and sidelined party leaders are quick to cross over to get a chance to contest.

The ruling BJP alone has fielded seven defectors, including six from the Congress and one from the BSP.

BJP nominees Mahesh Pratap Singh from Nathdawara, Ram Kishor Saini from Bandikui, Mamta Sharma from Pipalda, Kalpna Singh from Ladpura, Rajendra Bhamu from Jhunjhunu and Ashok Sharma from Rajkhera are the leaders who crossed over to the saffron brigade from the Congress.

Not to be left behind, the Congress has given tickets to at least four turncoats to test electoral waters.

Congress president Rahul Gandhi, who had in August stated that he will make sure that party workers have their say and no parachute candidate gets nominated in the next assembly elections in Rajasthan, seems to have swallowed his own words while finalising the ticket list for bright prospects of the party in the state.

Turncoats, who managed to get Congress tickets just after a few hours or days after leaving the BJP, include Harish Meena, Habib-ir-Rehman, Manvendra Singh and Zamindara Party legislator Sona Devi Bawri.

MP from Dausa Harish Meena, who had quit the party a day ago, has been fielded from Deoli-Uniara on a Congress ticket.

Similarly, BJP MLA from Nagaur Habib-ur-Rehman had also quit the BJP a day before the list was declared and has been fielded by Congress from Nagaur seat itself.

Among the parachute candidates who joined Congress include Kanhaiya Lal Jhanwar. He joined the Congress about five hours before the party's list was released and was fielded from Bikaner East.

Also, IPS officer Sawai Singh Godara has been fielded from Khinwsar just a few days after he took voluntary retirement.

Raj Kumar Sharma, who secured ticket from his current seat of Nawalgarh by the Congress, was an independent legislator earlier.