'Between You and Me' author Atul Khanna speaks about bureaucracy in India, 'societal moksha' 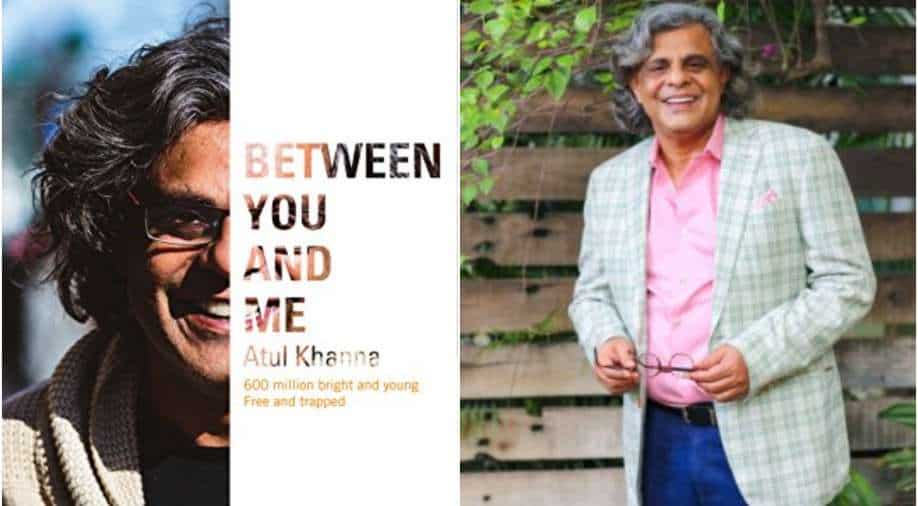 Between You and Me: Flight to Societal Moksha Photograph:( WION )

In an exclusive conversation with wionews.com, Atul Khanna spoke about how he fostered the idea of a new India in his book 'Between You and Me: Flight to Societal Moksha | 600 million bright and young; free and trapped', and his passion for rebuilding the country.

A recent democracy report by the Swedish V-Dem Institute -- which deplores and regrets the decline in democracy globally -- has primarily warned that India “is on the verge of losing its status as a democracy". One of the factors reponsible for this decline -- and not collapse, the report mentions, is severe shrinking of civil society."

Some intellectual trespassing between political philosophy and the social sciences have, to this end, helped entrepreneur and author Atul Khanna decipher the singlemost reason behind this -- the old form bureaucracy, which stands to break the backbone of Indian polity.

In an exclusive conversation with wionews.com, Atul Khanna spoke about how he fostered the idea of a new India in his book 'Between You and Me: Flight to Societal Moksha | 600 million bright and young; free and trapped', and his passion for rebuilding the country.

"We are being governed with unsharpened, old tools. The direction of change in the 21st century is uniquely programmed in a way that we should be champions, and not victims. These tools are making the 600 million odd people hungry, under-performing, and victims. We are giving premiums to 60-year-old people who are more interested in getting their pensions and playing safe. We have to get the rid of the 'ambassador car' (read: an old-fashioned model of car). India is a leadership-obsessed country, and we have to realise that we are just changing the driver of the car from time to time but the car will keep functioning the way it has always," Khanna told wionews.com.

The author of the book further said, "My book is about all this. It is about the governance of the country, and not about the political system. My book also has solutions in its later half. It gives structural solutions to India's problems.

"'Between Me and You' is in three parts -- 'what needs to change' makes the first part. The second is about assuming the change howsoever dramatic and revolutionary it may seem. 'What this changes would mean' makes for the third part."

The title 'Between Me and You' sounds somewhat a fictional account, but Khanna begs to differ.

He told wionews.com: "Rather than writing a boring civic lesson on how a system should function, I wanted to draw a larger audience. So the style of the book became its title."

So what are the tools that India needs to get rid of or adopt in order to pave its way back to development?

Khanna said, "First and foremost... We have to have a transferable vote. We also need a mixed model of voting where the elected leader comes via a transferable vote -- so that there are no political cartels. And the leader is elected by the people directly.

"In India, parties, unlike in other nations, are not governed by the Constitution. So nobody comes to know who get the ticket and why."

Under the system, areas elect a small team of representatives, such as four or five. These representatives reflect the diversity of opinions in the area.

On election day, voters number a list of candidates. Their favourite as number one, their second favourite number two, and so on. Voters can put numbers next to as many or as few candidates as they like. Parties will often stand more than one candidate in each area.

The numbers tell the people counting to move your vote if your favourite candidate has enough votes already or stands no chance of winning.

To get elected, a candidate needs a set amount of votes, known as the quota. The people counting the votes work out the quota based on the number of vacancies and the number of votes cast.

Each voter has one vote. Once the counting has finished, any candidate who has more number ones than the quota is elected. But, rather than ignore extra votes a candidate received after the amount they need to win, these votes move to each voter’s second favourite candidate.

If no one reaches the quota, then the people counting the vote remove the least popular candidate. People who voted for them have their votes moved to their second favourite candidate. This process continues until every vacancy is filled.

With the implementation of such system in India, the cartelisation of district votes, Khanna said, would go away. This would also kill dynasty politics, he added.

Khanna, however, said he is not against the son or the daughter succeeding the parent in politics. But, he said, "it should not happen in a system which is loaded in their favour."

In his book, Atul Khanna has also mentioned about the vice of rote learning. He told wionews.com: "You cannot decide if or not a person is eligible for a profession based on a two-hour long exam. Their should be an aptitude test as well. These exams thrive on scarcity -- of skills and talent.

"People often say to me I am a dreamer. Because these things sound so dreamy and far-fetched. But these ought to be done anyway."

They do. In all honesty. But the author has an interesting take on this.

Khanna said, "Would you rather have seed that take a long time to grow into a tree? Or a soil without any seeds?

"There is a complete lack of societal ideas in the society, particularly in India. And I am striving to bring them on through my book. I don't know if I'll be able to see it in my lifetime. But I'll strive so that somebody sees in their lifetime."

Khanna further summarised his entire book in one simple sentence -- "it's the bureaucracy that is standing in the way of people getting jobs, not any government."

"Look at the larger picture, the government has to fight elections every five years. What do these bureaucrats do? Bureaucracy is blocking the growth of the nation," he added.

The author then went ahead to explain in detail the 'better' half of the title of his book 'Flight to Societal Moksha'. He said, "Personal 'moksha' (read: salvation) has made people too selfish. The point I have stressed in my book is what we need to do to achieve 'societal moksha'; what we need to do to make the society better.

"Mediocrity finishes you. The larger vision of the society has changed to security. People want life-long incomes, life-long security. But nobody thinks about entrepreneurship. Social equity and rewards for entrepreneurship are totally missing from India."

"We have to work doubly, triply hard now so that we survive as a democracy. Being called a developing nation is a self-certificate. We have to save ourselves from being the laughing stock. We have to work, and entrepreneurship, and better opportunities to create it, is the only way," Atul Khanna added.

So what is so different about his book 'Between You and Me: Flight to Societal Moksha'?

"In my book, not only have I written about the problems, but also solutions. I have clearly said that the politicians are not bad; it's the political system that makes them that is the culprit. I have also written about the structural changes that need to be made for the 'societal moksha'. My books mentions what needs to be done; why and how. And also, who needs to do it," the author said.

Printed in black and white pages, the 300-page 'Between You and Me: Flight to Societal Moksha' was published in 2018 by Bloomsbury Publishing. It serves as a detailed analytical account of the Constitution. Author Atul Khanna also provides a set of suggestions to improve and upgrade the Constitution.

'Between You and Me: Flight to Societal Moksha | 600 million bright and young; free and trapped' is available on amazon.in.