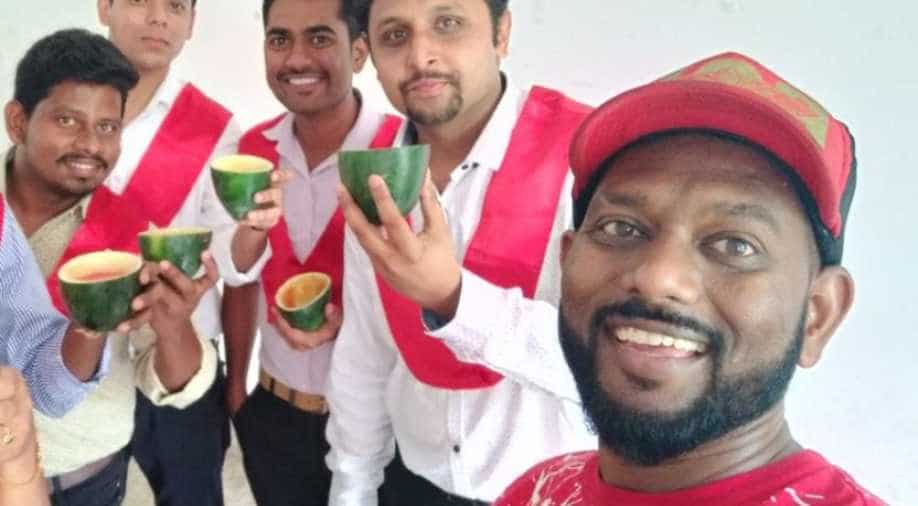 Raja was inspired to transform his cafe into a zero-waste eatery when he saw the South African city of Cape Town go dry in 2018. Photograph:( WION )

The outlet has been drawing quite a buzz as Raja, the cafe owner, serves his special drinks in organic cups that are nothing but fruit shells and peels.

The city of Bengaluru produces over 5,000 tonnes of garbage every day. While the city administration has attempted to impose no-plastic and segregation-at-source rules strictly, there is no 100 per cent adherence from the citizens and workers. But a juice cafe owner in the city is now proving that it is possible to go the zero-waste route.

Raja, a radio jockey, emcee, entrepreneur and self-proclaimed waste engineer runs the city's first zero-waste juice bar. The outlet has been drawing quite a buzz as Raja serves his special drinks in organic cups that are nothing but fruit shells and peels. This zero-waste cafe has completely done away with plastic and paper usage to promote sustainability.

"This is a 100 per cent zero-waste cafe. We have nothing that we throw out. We don’t use paper, plastic, carry bag, cups or straws since 2018. There is no dry waste at all. The only waste being generated is the fruit waste of which we do factory level segregation. We segregate the fruit waste at source into citrus, non-citrus. The citrus fruits are used to make bio-enzyme and the rest of it either gets composted or is used as cow feed. The seeds are used to make art-work, jewellery and rangolis. The whole idea was to repurpose everything that is thrown as waste" Raja tells WION.

Raja was inspired to transform his cafe into a zero-waste eatery when he saw the South African city of Cape Town go dry in 2018. Some studies had also predicted that Bengaluru could be the next city to follow.

"I realised that at my juice centre, we were using nearly 250ml of water to wash each glass. If I was selling 100 glasses of juice a day, it meant that I was flushing out 25 litres of water down the drain. I realised it was a criminal waste of water, especially when the whole world is facing a crisis. So I got thinking if we can do something better. Since I am an engineer, I realised if I do not engineer the process of saving something then there is no point in studying the course. I looked at the fruits and I saw that the smaller watermelons, when halved, could be used to serve the juice that was made from its pulp," he says.

Using fruit shells as cups has not only helped save water but also reduced waste and minimised labour time for his staff. The used shells are then supplied to cattle owners as fodder. Today, Raja uses fruits like watermelons, musk melons, sun melons, oranges, guavas, bananas and several other fruits to serve the juices.

"Now I have 22 different varieties of fruits and vegetables that I serve my juices in. I am the owner of India’s first juice bar to serve juices only in fruit shells. We don’t use glasses at all," says Raja, exuding pride.

Raja does not see this model just as a service to the society but believes that waste is wealth which can be monetised. He is currently working to build a network of juice centres that can segregate the waste supply it to farms and cattle owners.

"I see myself as a waste engineer because there is a lot to be monetised from waste. I hold workshops where we say you can make cash out of trash. I am planning to ask cattle owners to give me milk in exchange for the fodder as I have stopped using milk packets because it generates plastic waste. There is economy in waste" Raja concludes.