At UNHRC, India calls for release of political detainees in Myanmar 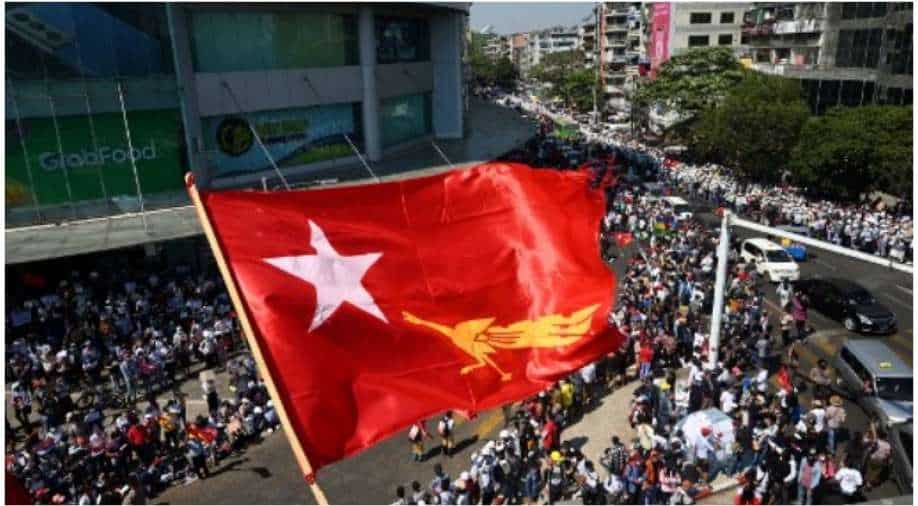 The flag of the National League for Democracy party flies over protesters taking part in a demonstration against the February 1 military coup in Yangon on February 10, 2021 Photograph:( AFP )

This is the third such official statement by India in the aftermath of the February 1 coup. The first two statements were made by the Ministry of External Affairs (MEA).

India has called for release of detained political leaders and upholding of "democratic processes" in Myanmar in the aftermath of a military coup in the country.

India's envoy to UN in Geneva Indra Mani Pandey, while addressing the UN Human Rights Council, said, "Unfortunately, the hopes and aspirations of the people of Myanmar have been dealt with a blow by the latest developments. We strongly believe that the rule of law and democratic processes must be upheld and the detained political leaders released."

"The right to protest peacefully is an integral part of the democratic ethos," he added.

This is the third such official statement by India in the aftermath of the February 1 coup. The first two statements were made by the Ministry of External Affairs (MEA).

The Indian envoy in his statement expressed deep concerns, and called on "the leadership of Myanmar to work together to resolve their differences in a peaceful and constructive manner" and that "restoring democratic order should be the priority of all stakeholders in Myanmar."

Also, India lauded the "progress achieved on the path to democracy, over the last decade or more" which was "impressive".

Pandey, to this end, said, "India shares a land and maritime border with Myanmar. We have direct stakes in the maintenance of peace and stability and the development of the country and we propose to continue with our developmental efforts so that people on the ground do not suffer."

New Delhi had earlier sent 1.5 million India-made vaccines to Myanmar. India is also engaged in number of connectivity projects with the country, including operationalisation of Sittwe project.