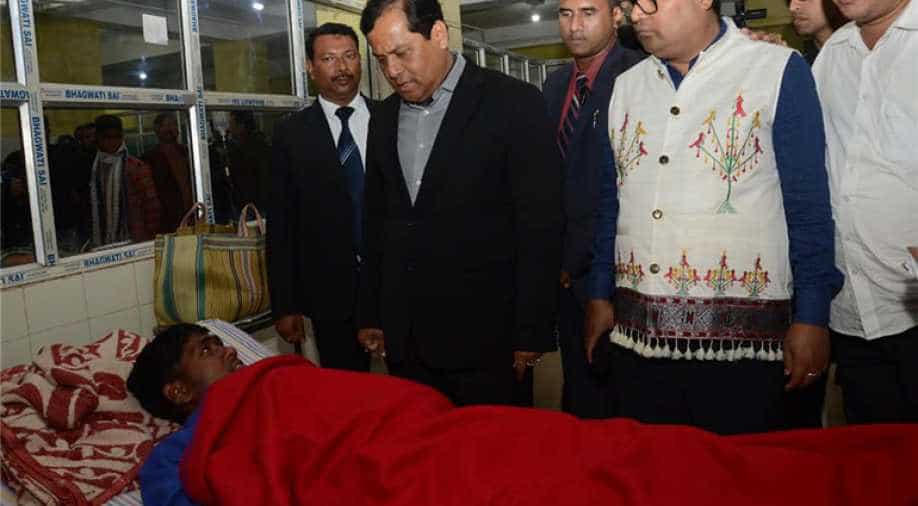 According to health department officials 46 people died in JMCH, 35 in Golaghat civil hospital and four in Titabor sub-divisional hospital.

The hooch tragedy in Assam's Jorhat and Golaghat districts claimed 85 lives till Saturday while 340 people were undergoing treatment in hospitals, officials said.

Chief Minister Sarbananda Sonowal met the affected at Jorhat Medical College Hospital (JMCH) and announced an ex-gratia payment of Rs two lakh to the next of kin of each of the deceased and Rs 50000 to those who fell ill.

Sonowal said the guilty will not be spared, even as the opposition Congress accused the BJP government in Assam of not taking adequate steps to stop the sale of illicit liquor and demanded the resignation of state excise minister

Police said twelve persons have been detained in Golaghat for interrogation. Two persons were arrested in connection with the tragedy on Friday.

According to health department officials, 46 people died in JMCH, 35 in Golaghat civil hospital and four in Titabor sub-divisional hospital.

Assam: After the death of 83 people due to consumption of spurious liquor in Golaghat & Jorhat, Excise Department & District Administration are conducting operation across the state against manufacture & sale of illicit liquor. 15,000 liters of liquor has been destroyed till now pic.twitter.com/8DDTL1vjnf

In JMCH, 221 people are undergoing treatment for complications due to consumption of spurious liquor, while another 111 are being treated in Golaghat and eight in the Titabor hospital, they said.

A large number of labourers of two tea estates of Golaghat and Jorhat districts had fallen ill after drinking the spurious liquor on Thursday night and 12 of them had died the same night.

Sonowal reviewed the condition of victims of the hooch tragedy undergoing treatment at JMCH. He expressed condolences to the bereaved families.
Sonowal had ordered an inquiry into the incident by Upper Assam Division Commissioner Julie Sonowal on Friday and directed her to submit the report within a month.

Health Minister Himanta Biswa Sarma, who also visited JMCH, said this morning that the "death toll and the number of people admitted is changing minute to minute".

Asked if spurious liquor is still being sold in view of fresh cases being reported, Sarma said, "Patients who had developed complications two-three days ago are coming now. Some who had consumed liquor earlier are coming for treatment after hearing the news of the hooch tragedy out of fear. These people are psychologically in shock and so they think they are ill."

Besides, the director of medical education Anup Barman, directors of Health, Assam and the National Rural Health Mission will be stationed in Jorhat to supervise and coordinate the services being provided to the patients, the minister said.

"The prime consideration now is how to give best medical treatment to the affected," Sarma said.

Considering the situation in Jorhat vis a vis the hooch tragedy, hospital authorities have been asked to restrict the number of patients admitted with other complaints so that a maximum number of those who were taken ill after drinking spurious liquor can be accommodated there.

Hospital authorities have also been instructed to provide food for the attendants of the hooch victims, besides the mandatory health care facilities and medicines.

Assam Director General of Police Kuladhar Saikia said 12 persons have been detained in Golaghat for interrogation.

Senior Congress leader and former chief minister Tarun Gogoi has demanded a judicial inquiry into the incident and accused the BJP government in the Assam of not taking adequate steps to stop the sale of illicit liquor.

Activists of the state's leading student and youth organisation Asom Jatiyatabadi Yuba Chatra Parishad burnt an effigy of the excise minister at Golaghat and demanded his resignation.

This is the second major hooch tragedy in the country within a fortnight. At least 70 people had died in Uttar Pradesh and Uttarakhand after drinking spurious liquor.