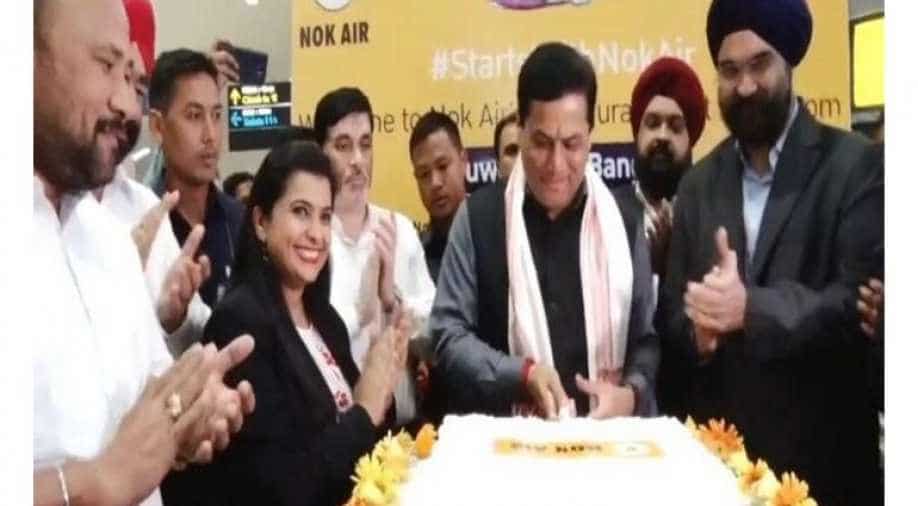 The 10 ASEAN nations are also expected to set up their embassies in Guwahati soon.

Giving a boost to the State governments initiatives to transform Guwahati as a gateway to the ASEAN region, Assam Chief Minister Sarbananda Sonowal on Sunday flagged off the first flight to Bangkok at Lokapriya Gopinath Bordoloi International Airport.

The first flight which took off from LGBI Airport witnessed the traditional water saluting.

Nok Air, which will be flying its sortie between Guwahati and Bangkok, has carefully drafted its sorties to enable passengers to reach the destination at Don Mueang near Bangkok in less than three hours, offering a convenient connection to both business and leisure travellers twice in a week.

Chief Minister Sonowal viewed that the introduction of the flight is not just an extension of the airline route but more importantly a futuristic gesture, which will go a long way in reinforcing the cultural and economic ties between Assam and Thailand and strengthening the bilateral relations.

Sonowal observed that connectivity has always remained a major bottleneck in the optimum realisation of the growth prospects of the region. Keeping this in view, the Central Government has taken up steps to connect six Southeast Asian destinations from Guwahati under UDAN scheme.

On July 1st this year, the first Guwahati-Dhaka flight by Spicejet under International Air Connectivity Scheme was flagged off. The flight marked the roll-out of UDAN-International, pioneered by Assam Government with viability gap funding of Rs 100 crore. In the next few months, flights connecting to Kathmandu, Yangon, Hanoi and Kuala Lumpur will also commence.

Last year DrukAir - Royal Bhutan Airlines introduced a Paro-Guwahati-Singapore flight. The Central government has also taken a historic decision to bring 19 destinations in the Northeast including five cities in Assam under the regional connectivity scheme UDAN-2. This initiative would significantly facilitate regional air connectivity by making air travel affordable for the masses.

The Union Government aims to turn LGBI Airport into an International airport, connecting Southeast Asia. Lokapriya Gopinath Bordoloi International Airport has undergone numerous expansions and renovations since its establishment in 1958. It handled more than 3.7 million passengers in 2017, an increase of 36 per cent from 2016. It has witnessed an annual traffic increase of over 23 per cent in 2018-19 with a total footfall of 5.7 million passengers and 55,066 aircraft movements in the same period.

The existing terminal building at the airport has a maximum handling capacity of 850 arrivals per departure passengers an hour. The work on a new terminal has already made significant progress. This will further boost the growth narrative of the entire region.

The new terminal will be the first sustainable terminal of the North East having sewage treatment plant, solar power, rainwater harvesting, solid waste disposal system and energy-efficient lighting. Once completed, this would generate around 3000 direct employment and approximately 20,000 indirect employments.

Boosting the State government's efforts, Bangladesh and Bhutan governments have already set up their embassies in Guwahati. The 10 ASEAN nations are also expected to set up their embassies in Guwahati soon. The Act East Policy of the Government of India gives new hope for the growth of the region. The newly found confidence of the people in the state can be witnessed in all spheres of socio-cultural and economic life.

As an offshoot of the efforts of the State government, farmers of Assam for the first time could successfully export their agricultural produce to London, Dubai, Abu Dhabi and other foreign countries.