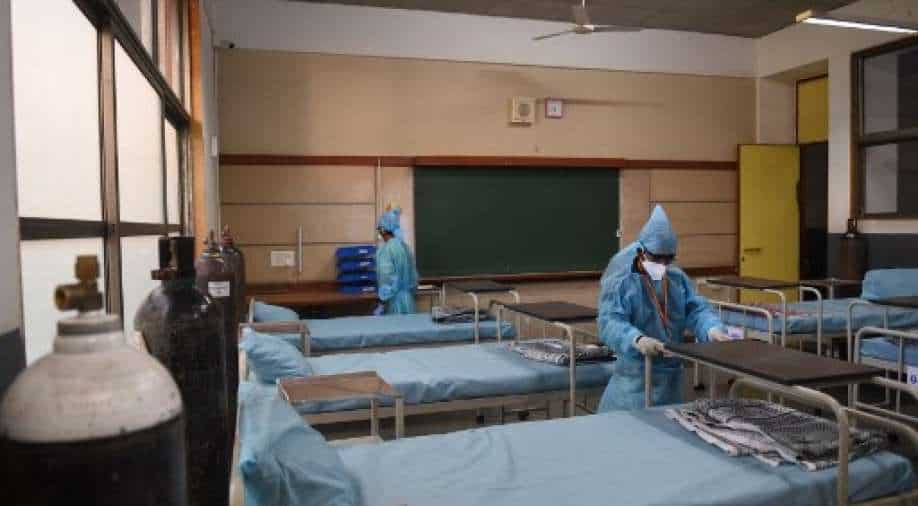 Beds being arranged at the Adani Vidya Mandir school on the outskirts of Ahmedabad Photograph:( AFP )

India's caseload hasn't been reducing for two weeks with more than 300,000 new cases added every day. In the last 24 hours, over 382,000 tests came back positive

As India struggles with a deadly second wave, the government's principal scientific advisor has said that a third wave is inevitable.

It's hard to imagine a situation worse than the one India is currently suffering. In the last week, 46 per cent of all global cases were recorded from India including 25 per cent of all deaths which is an increase of 20 per cent compared to the previous week.

India's caseload hasn't been reducing for two weeks with more than 300,000 new cases added every day. In the last 24 hours, over 382,000 tests came back positive and around the same number of people have recovered with more than 338,000 people discharged from hospitals.

At least 17 million people have recovered since last year. India now has around 3.5 million active cases and the highest single-day death toll so far - 3,780 deaths reported on Tuesday.

A third wave is inevitable, K Vijay Raghavan, principal scientific advisor to the government of India has warned. Raghavan has made three big statements.

Firstly, "a third wave is inevitable" because the virus is circulating at a high level and as it continues to mutate and evolve, it leaves the door open for a third wave.

K Vijay Raghavan said it is not clear when India will see the third wave but added that the country should still prepare for it.

Secondly, vaccines are still effective against the variants in circulation right now, so getting a jab is important. Also, watch out for the mutations, Raghavan added, which is a new challenge. The virus will keep mutating and there will be variants of all kinds - strong and weak. India needs to map and study them.

So as India prepares for an uncertain future, it must also deal with a grim present.

The challenges seem endless. Black marketing of drugs has begun on a large scale as cases have exploded and supplies have run out. From oxygen supplies to Remdesivir injections, everything is being sold in black at elevated prices.

As people run from pillar to post to arrange beds, VVIPS remain lodged in hospitals just for fever. A major government hospital in Delhi didn't admit members of its own staff after doctors and nurses tested positive despite having 35 VIP nursing home rooms.

Even after a month into the second wave, India is struggling to ensure a steady supply to hospitals.

These horror stories are not limited to India. Greed and corruption are not unique to any country. In Indonesia, a company recycled used cotton swabs for Wuhan virus tests. Last week,  five workers of the firm were arrested.

They had acquired used swabs and washed and re-packed them. These swabs were later shipped off to the third largest airport in Indonesia. Reports say it could have affected 9,000 travellers since December.