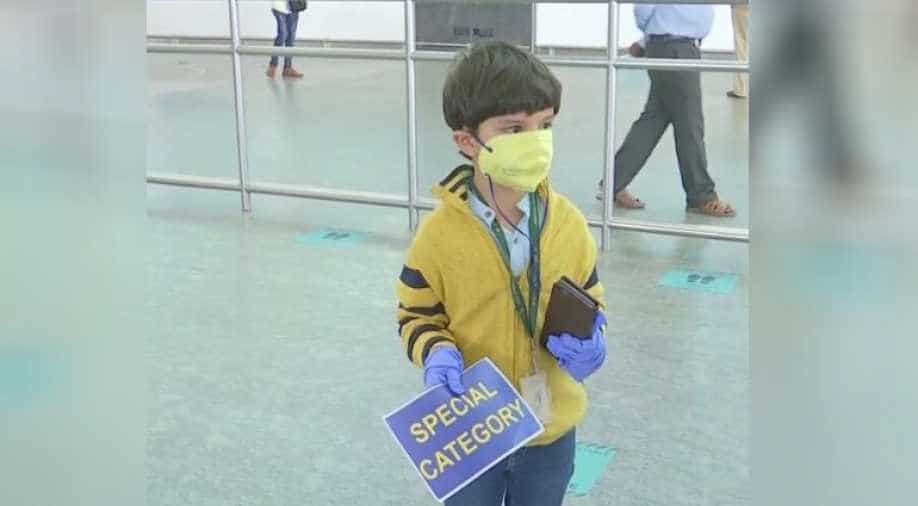 Many states were reluctant to reopen airports, especially in light of the record-breaking new cases everyday across the country

A five-year-old boy travelled alone from Delhi to meet his mother in Bengaluru after three months. A few domestic flight routes started plying across the country, and Vihaan Sharma was one of these fights.

Bearing a “special category” ticket, the boy met his mother after three months at the Kempegowda International Airport, ANI reported.

Flights resumed operation today after two months owing to the lockdown induced by the COVID-19 pandemic which continues to wreak havoc across the country.

"My five-year-old son Vihaan has travelled alone from Delhi, he has come back to Bengaluru after three months," his mother told ANI, holding Vihaan, donning protective gear. The last flights plied in the end of March, after which the country was put under a strict lockdown to slow down the spread of COVID-19. However, this rendered many unable to go back to their homes, just like the young boy.

Many states were reluctant to reopen airports, especially in light of the record-breaking new cases everyday across the country, especially in the hard hit states of Maharashtra, Tamil Nadu, Gujarat, and Delhi.

Karnataka:Passengers leave from Kempegowda International Airport in Bengaluru, as two flights have landed till now at the airport. A mother who came to receive her son says,"My 5-yr-old son Vihaan Sharma has travelled alone from Delhi,he has come back to Bengaluru after 3 months" pic.twitter.com/oAOsLCi7v9

The Aviation Minister Hardeep Singh Puri said that the flights restarted operating after a long of “hard negotiations” owing to disagreements from many states that feared a rise in the number of infections.

International flights could start plying as early as June, depending on the global condition of coronavirus.

However, people are required to follow strict protocols that include wearing protective gear to maintaining social distance to prevent cross-transmission of the virus.

"Today morning onwards, processes have been working very well. All processes have been made contactless. We are screening all passengers. All the surfaces are being sanitised every 20-30 minutes", Hari Marar, Managing Director & CEO, Bangalore International Airport Ltd told ANI.