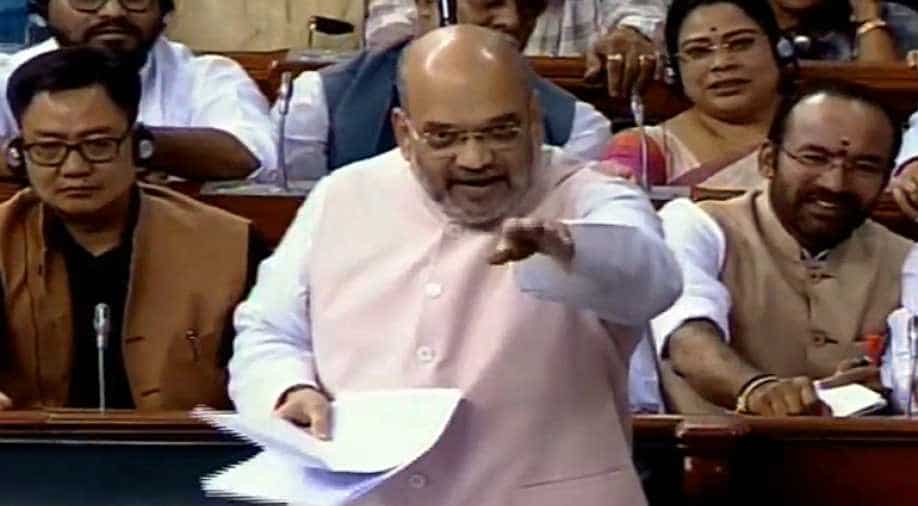 Home Minister Amit Shah said in Parliament on Friday that assembly elections in Jammu and Kashmir will be held in a democratic, free and fair manner as soon as the Election Commission announces the dates.

He also told Lok Sabha that Article 370 of the Constitution which extends special status to Jammu and Kashmir, is "temporary in nature" and "not permanent".

In a scathing attack on the Congress, he said that Partition of India on the basis of religion was a "historical mistake" by then Prime Minister Jawaharlal Nehru.

The Home Minister also said that the present situation in Kashmir was the outcome of the misdeeds of Nehru who referred the issue of 'Accession of Kashmir to India' to the United Nations and proclaimed Article 370 there.

"Article 370 is effective only in Jammu and Kashmir, which was negotiated by the then Prime Minister," Shah said.

"One-third of Jammu and Kashmir is not with us. Who is responsible for it? Who called for ceasefire back then? It was Jawaharlal Nehru who did it and gave that portion (PoK) to Pakistan. You say we don't take people into confidence, but Nehruji did it without taking the then Home Minister into confidence," he said.

Shah said if the then Home Minister Sardar Vallabhbhai Patel was taken into confidence, the entire Kashmir had been part of India.

He also said that Sardar Patel led the accession of most of the princely states including Hyderabad and Junagarh and both are today part of India.

"The country is suffering due to his (Nehru's) mistakes. Thousands of people were killed in Partition and terrorism spread across the country," he said.

Shah's remarks led to verbal spat between the Opposition and the treasury benches with the Congress leaders objecting to the continued reference of Nehru by Shah.