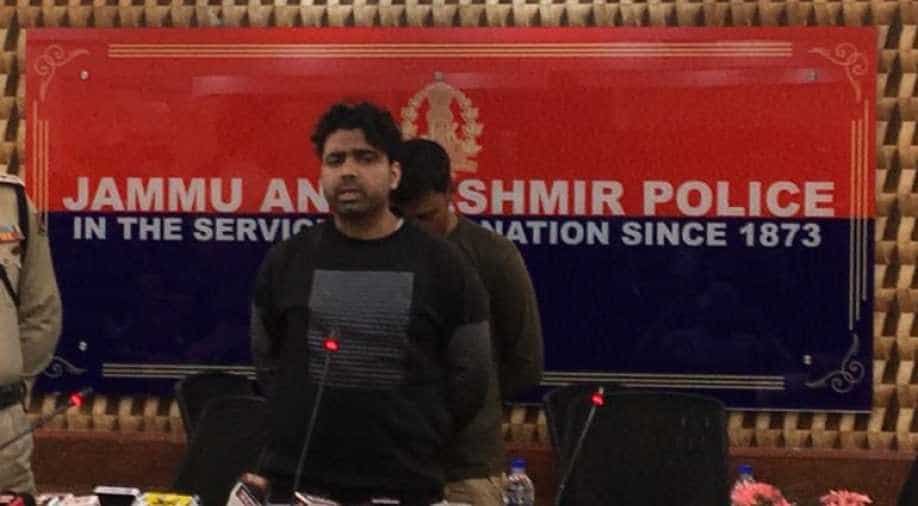 Waqas told media that he was told that people in Kashmir aren't allowed to even pray inside mosques.

Speaking to the media in Srinagar, the Director General of Jammu and Kashmir Police said that the arrested Pak terrorist is a living proof to Pakistan for their involvement in terrorism in Kashmir valley.

"Pakistan always wishes for live evidence, now we have held a resident of Pakistan who is associated with Lashkar-e-Taiba," he said before presenting him.

The Jammu and Kashmir Police on Wednesday presented a Pakistani terrorist in front of media after he was held by security forces in Pattan area of north Kashmir’s Baramulla district on Monday.

Speaking to media briefly, the detained terrorist identified himself as Mohammad Waqas, a resident of Mohalla Miana, Mianwali of Punjab province in Pakistan. "I am from Pakistan and associated with Lashkar. I'm 27 years old and came to Kashmir in 2017. I took training in Muzaffarabad," he said.

Waqas told media that he was told that people in Kashmir aren't even allowed to pray inside the mosques.

Sources told WION said that he was trained at Zakiur Rehman Lakhvi’s house and had met him on two occasions. The police said that they will be able to share more details after more questioning is done in the coming days.

The top cop was flanked by Lt General KJS Dhillon, GoC Chinar Corps and Zulfikar Hassan, Inspector General Operations CRPF.  They told the media that there has been a considerable dip in the number of militants joining terror outfits.

"Large scale modules which were working on behalf of several outfits were arrested. Stone pelting, law and order came down to a very big extent. The youth didn’t indulge in stone pelting much," Dilbag said.

The Army Commander said that a total of 69 terrorists have been killed so far in different operations.

"A total of 69 militants have been killed, 12 have been apprehended, 49 have been killed since Pulwama blast. Among them, were category A plus. We have targeted Jaish-e-Mohammed leadership." he added.

On IED threats, Dilbag Singh told WION that "we have and are spending sleepless nights to avert such things. We are taking every input seriously."