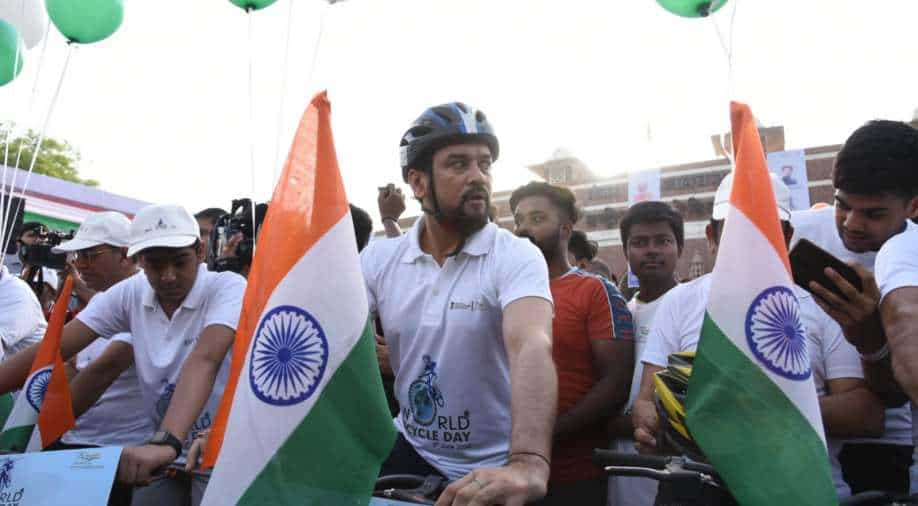 On the world bicycle day, across the country, thousands of cyclists joined Union Minister for Youth Affairs and Sports Anurag Thakur for the camping for fit India movement, Khelo India movement, Clean India movement and Health India movement. He started from Major Dhyan Chand Stadium, Delhi and peddled a distance of 7.5kms with 750 cyclists.

‘Fit India Freedom Rider Cycle Rally’ was launched by Union Minister for Youth Affairs and Sports Anurag Thakur from Major Dhyan Chand Stadium, Delhi on the occasion of World Bicycle Day 2022, as he himself peddled a distance of 7.5kms with 750 cyclists.

"Cycling can play the biggest role in the Fit India campaign. On World Bicycle Day, we are giving a clear message that everyone should make cycling a part of their daily life. Cycling will keep you healthy and help build a clean India," Thakur said in a release.

"On the world bicycle day, across the country, thousands of cyclists have joined us for the camping for fit India movement, Khelo India movement, Clean India movement and Health India movement. By using the bicycle you can cut down the pollution level, you can stay fit and you can also promote the clean India campaign because there will be less pollution or no pollution by the use of bicycles," he added.

More than 9.68 lakh kilometres of distance will be covered by 1.29 lakh young cyclists through the proposed bicycle rallies organized today on World Bicycle Day 2022.

The aim of cycle rallies organized in the country is to encourage and motivate people to adopt cycling in their daily lives for physical fitness and keep them immune to health disorders including obesity, stress, anxiety, and diseases.

The cycle rallies across India on World Bicycle Day have been organized by the Ministry of Youth Affairs and Sports as part of the celebration of Azadi ka Amrit Mahotsav-India@75.