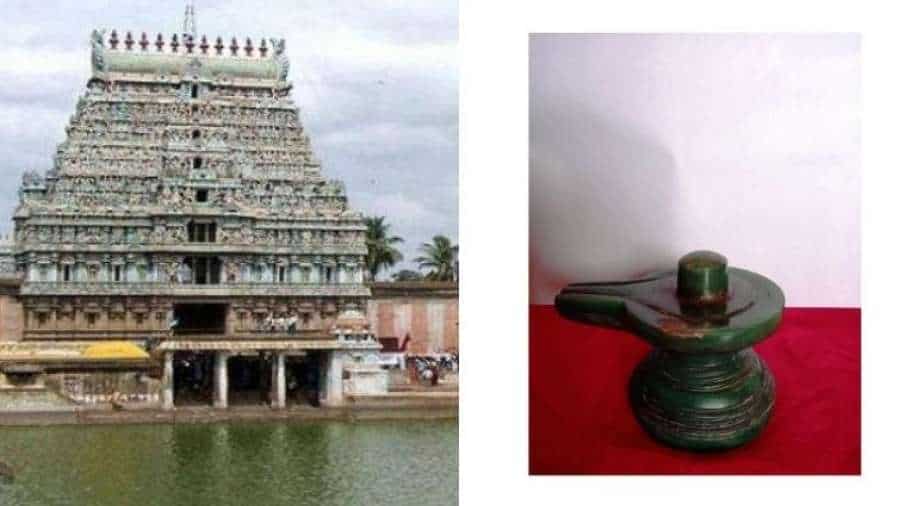 An FIR has been filed in connection with the disappearance of an emerald lingam from a Shiva temple in Tirukkuvalai, Tiruvarur district, in 2016, and preliminary investigations have revealed that the discovered object could be the one. Photograph:( Twitter )

The 1,000-year-old emerald lingam taken from the temple was thought to have been imported by King Rajendra Chola from an East Asian kingdom during his reign.

An emerald lingam claimed to be worth Rs 5 billion has been recovered from a bank locker of a man in the Indian Southern State of Tamil Nadu's Thanjavur on Thursday.

The idol wing of the CID police, led by ADGP K Jayanth Murali, informed the media in Chennai on Friday that they had acted on a tip that antique idols were being housed at a residence in Thanjavur.

The emerald lingam known as the 'Maragatha Lingam' (Shiva Lingam carved out of emerald) is estimated to be worth Rs 5 billion and was taken from the old Sri Thiyagaraja Swamy Temple, maintained by the Dharmapuram Aadheenam in Thirukkuvalai near Nagapattinam in 2016.

The emerald lingam was taken from the bank locker by the police squad.

According to the sources, a scientific investigation will be performed to determine its age, but it is expected to be 1,000 years old.

A case has been filed and is being investigated by the Idol wing police.

The 1,000-year-old emerald lingam taken from the temple was thought to have been imported by King Rajendra Chola from an East Asian kingdom during his reign.