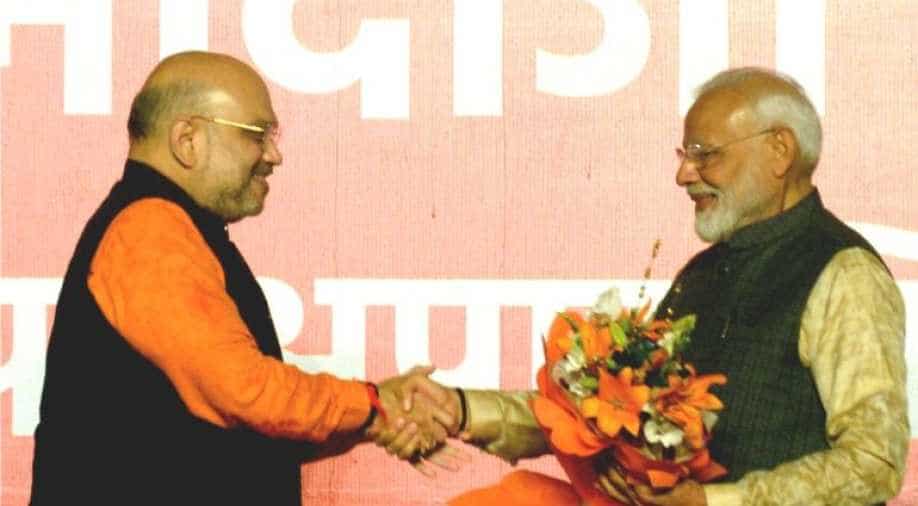 A man with avowed aim of having the BJP rule from 'panchayat to Parliament', Shah has built his party into a formidable army that has been forever marching on since he took charge as its president in July 2014.

BJP chief Amit Shah on Thursday took oath as a Cabinet minister in the Narendra Modi government. This is the first time that Shah is entering the government.

Known as an astute strategist whose non-political interests range from playing chess and watching cricket to stage performances and listening to classical music, 55-year-old Shah is often hailed as the BJP's most successful president for crafting its way to power states after states.

The record tally that he delivered for the BJP in the Lok Sabha 2019 elections is already being seen by many as something that would be difficult to repeat.

A man with avowed aim of having the BJP rule from "panchayat to Parliament", Shah has built his party into a formidable army that has been forever marching on since he took charge as its president in July 2014.

Political pundits say Shah has used a skilful mix of ideological firmness, unlimited political imagination and realpolitik flexibility to keep the BJP ahead of the game.

He fought the Lok Sabha election this year for the first time from Gandhinagar seat in Gujarat, and defeated Congress's J Chavda by a record five lakh votes.

Having risen through the ranks since starting at the booth level for the party in Gujarat at the age of 14 years, Shah is a firm believer in the prerequisite of a strong ground-level organisational machinery for poll successes.

For the 2019 elections, he deployed over 7,000 leaders for nearly 500 poll committee across the country, with special focus on 120 seats that the BJP had lost in 2014, and brought in 3,000 "full-timers" across parliamentary seats.

Seen as a Modi confidant, Shah also brought about cohesion between the government and the party, with the party leaders promoting the government's work and the ministers being used for the party work.