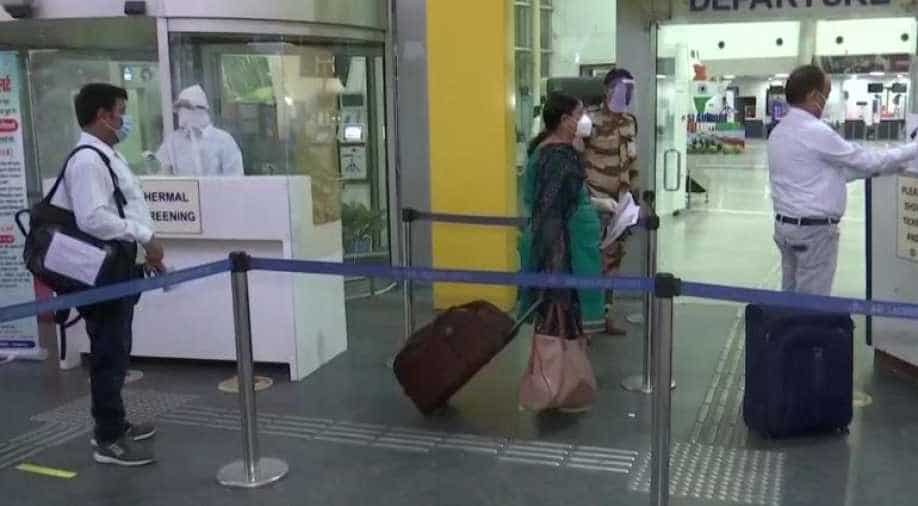 Passengers arrive at Lucknow Airport to board their respective flights, as domestic flight operations have resumed from today. (ANI Photo) Photograph:( ANI )

The very first of these flights took off from Terminal 3 of the Indira Gandhi International Airport in New Delhi today at 5 AM and landed in Pune at 6:42 AM.

Domestic flight operations resume in India on Monday with Delhi-Pune and Mumbai-Patna flights being among the first to take off, according to reports.

The very first of these flights took off from Terminal 3 of the Indira Gandhi International Airport in New Delhi today at 5 AM and landed in Pune at 6:42 AM.

The first flight from Delhi's IGI airport since resumption of domestic flight operations, lands at Pune. A passenger who has arrived in the city by the flight says,"I was nervous before the flight but all passengers were taking precautions. Very few people travelling right now". pic.twitter.com/NgBY9L6h4i

Passengers are being screened using a thermometer gun before boarding the aircraft, while visuals showed Food & Beverage (F&B) and retail outlets opening at the IGI Airport as well.

Also read: Domestic flights resume from May 25 — Here are the dos and don'ts for flyers

Those who took first flights included paramilitary personnel, army men, students and migrants, who failed to book a ticket on special trains being run by the railways.

Many said they shelled out more to reach the airport as there were limited public transport options available.