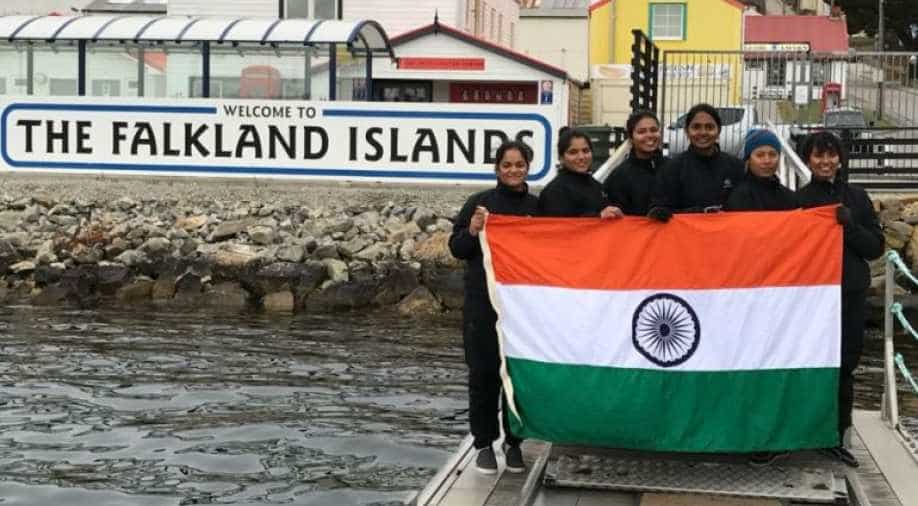 INSV Tarini was flagged-off from Goa on September 10, 2017 Photograph:( Twitter )

INSV Tarini, on its maiden voyage across the globe, entered Port Stanley (Falkland Islands) today and is likely to depart on 4 February.

INSV Tarini is India's first attempt at circumnavigating the globe with an all-women crew.

Tarini was flagged-off from Goa on September 10, 2017, by Union Defence Minister Nirmala Sitharaman.

The vessel has covered around 15000 Nautical miles from Goa.

It crossed the Equator on 25 September 17, Cape Leeuwin on 9 November, 17 and Cape Horn on 18 January this year.

The 56-foot long INSV Tarini was introduced to the Indian Navy earlier this year and is built indigenously showcasing the spirit of 'Make in India'.

INSV Tarini is expected to return to Goa after the completion of its voyage in April 2018.

"The expedition is being covered in five legs, with stop-overs at four ports: Fremantle (Australia), Lyttleton (New Zealand), Port Stanley (Falklands), and Cape Town (South Africa). Presently, the vessel has covered three of the five legs of the voyage, with the first port halt at Fremantle (Australia) in October and the second at Lyttelton (New Zealand) in November last year," noted the official release.