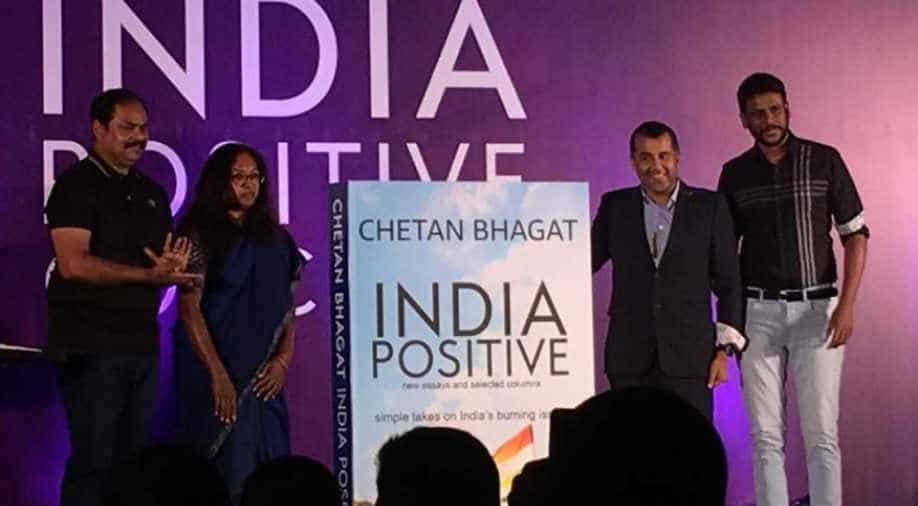 Bhagat’s latest book is a collection of short essays on contemporary political issues and examines a wide array of subjects. Photograph:( WION )

The author said that his book was written keeping in mind the attention span and the curiosity of the current generation. The book comprises a compilation of essays.

Barely five days ahead of the results to country's general election, best-selling author Chetan Bhagat was in Chennai to launch his latest non-fiction work ‘India Positive’.

He addressed the gathering at the India Positive Conclave on Saturday which aimed to drive a conversation around positive political culture and constructive politics.

Bhagat’s latest book is a collection of short essays on contemporary political issues and examines a wide array of subjects such as education, GST (Goods and Services Tax), corruption and casteism.

Speaking at the book launch, the author highlighted the heightened political awareness and curiosity amongst the youth and netizens by taking the example of the recent Twitter poll where he found that over 84 per cent of the respondents believed that the election results on May 23 were more exciting or as exciting as the Cricket World Cup finale.

The author said that his book was written keeping in mind the attention span and the curiosity of the current generation. The book comprises a compilation of essays, each of which is two to three pages in length.

Adding a personal touch to this speech, Chetan referred to his wife’s Tamil origins and spoke about the humility of Tamil people. Referring to Tamil Nadu’s notable rate of growth and development, he said that Tamil culture did not encourage marketing, as they are good at performing. He also stated that there is no shame in marketing good work. He even hoped to see a Tamilian Prime Minister in the years to come.

Making a specific reference to the political scenario in the country, Bhagat said that 'India Positive' is not about who wins the elections and that the biggest problem is not one particular party. He highlighted the need to stop promoting hate against other religions and emphasized on the need to focus on issues such as infrastructure and pollution.

The conclave also featured a panel discussion by eminent politicians, entrepreneurs and public figures of Tamil Nadu, on the need and scope for positive politics for the benefit of the state and its population.

While the panel discussion did occasionally witness verbal duels between the political opponents, there were also rare scenes of political courtesy and civility when the politicians credited the achievements and schemes of their respective opponents.

The AIADMK minister also appreciated the efforts of the Congress and the DMK referring to the 100-days employment guarantee scheme and the DMK’s move to introduce reforms in education at the state level.