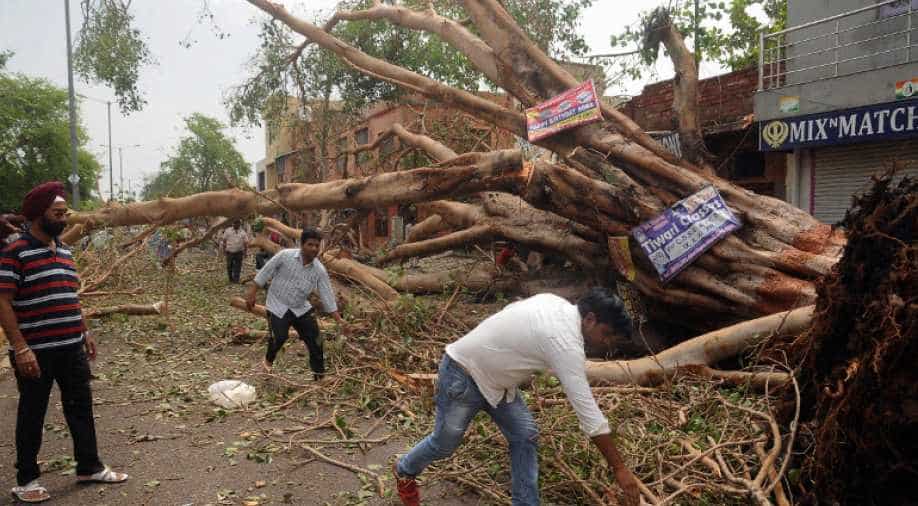 People try to clear a road in Agra. Photograph:( PTI )

A western disturbance over north Pakistan and adjoining Jammu and Kashmir, and easterly winds from the Bay of Bengal are responsible for the dust storm

Uttar Pradesh's Agra has been put on a 72-hour alert by the weather office the alert has been issued till Monday.

According to Gaurav Dayal, Agra District Magistrate, a detailed advisory will be issued to manage any imminent disaster.

The alert comes after a dust storm swept through north India in states like Rajasthan and Uttar Pradesh killing at least 106 people.

The 132-kmph dust storm hit Agra on late Wednesday night followed by heavy showers and hailstorm. As many as 44 people have been reported dead in the city while property worth crores have been destroyed.

Officials suggest the number of casualties to rise further.

Agra has witnessed a couple of devastating storms in past 20 days. According to reports, over 1,400 villages continue to remain without power supply.

The deadly storm also affected the transportation system in the city with many trains running behind schedule.

Historical buildings and heritage architecture including the Taj Mahal have also suffered damages. While several trees in the mausoleum were uprooted, two wooden doors of the Taj minarets have also been damaged.

Farmers have also suffered a loss of crop and have been promised compensation and relief aid.

A western disturbance over north Pakistan and adjoining Jammu and Kashmir, and easterly winds from the Bay of Bengal were also responsible.