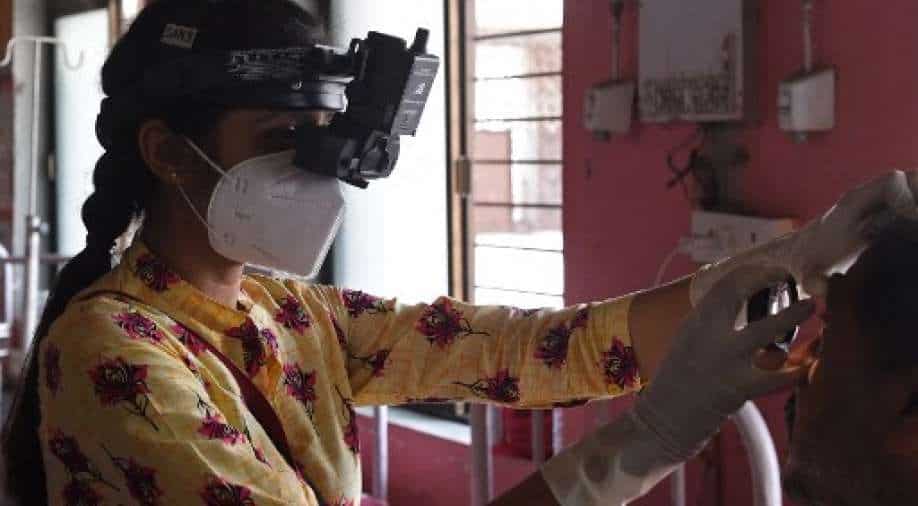 A doctor examines a patient infected with black fungus in Ahmedabad Photograph:( AFP )

Although new infections have been dropping, the daily death toll still hasn't gone down. In the last 24 hours, India reported close to 4,500 deaths which is the second-highest daily death toll for India

Although new infections have been dropping, the daily death toll still hasn't gone down. In the last 24 hours, India reported close to 4,500 deaths, which is the second-highest daily death toll for India.

The highest was last week, with over 4,500 fatalities. As for daily infections, the fall is clear and significant. India has reported less than 250,000 new cases in a day, which is the lowest since April 15, and active cases have dropped below three million.

More than 300,000 people recovered on Sunday and over 23 million people have done so since last year, so India has reported more recoveries than new infections.

However, there have been new complications - fungal infections. After black fungus and white fungus, new cases of yellow fungus have emerged.

The yellow fungus cases were reported today. Black fungus has been declared an epidemic in India, with hundreds of patients and a shortage of drugs to treat them.

Then a deadlier white fungus was found in Bihar with four cases reported last week and now, in Uttar Pradesh, doctors have found yellow fungus.

It is a peculiar case as there has been one patient who has all three forms of fungal infection - black, white and yellow.

The yellow fungus is usually found in reptiles. The doctor treating the patient said they have never seen a patient with yellow fungus before.

Bad hygiene around the patient is believed to have caused it and the cure for it is reportedly the same treatment used for other such infections - amphotericin b injections.

This drug has now replaced oxygen and Remdisivir in SOS calls and there is a shortage.

Over the weekend, the Indian government allocated more than 20,000 vials of this drug to all states and Union Territories with five more manufacturers given a licence to make the drug.