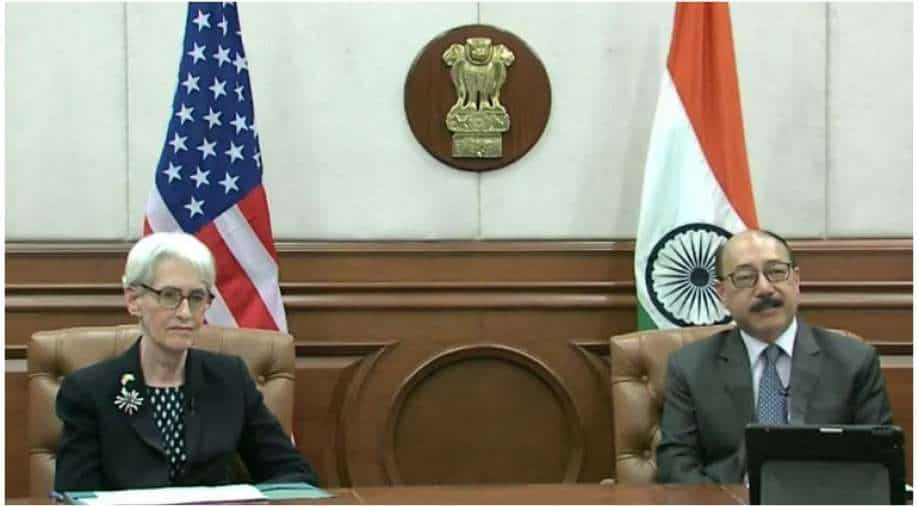 The situation in Afghanistan and Chinese aggressive actions were among the key focus areas during the conversation between US Deputy Secretary of state Wendy Sherman and foreign secretary Harsh Shringla. This was the first visit by any senior Biden administration official to India after the visit of Prime Minister Narendra Modi to US.

Foreign secretary Harsh Shringla at US-India Business Council or USIBC event, sitting alongside deputy secretary of state said,"There is an organic growth and momentum in the bilateral relations, given the deep stakes and investments in India-US relations by a multitude of stakeholders on both sides" and "this relationship is one of our most important. India considers its relationship with US of paramount importance"

The visit essentially starts the more sectoral meetings between the 2 countries. The meetings of Defense Policy Group, Economic and Financial Partnership dialogue, Trade Policy Forum, dialogues on counter-terrorism and designations and the 2+2 ministerial will take place soon. The Indian finance minister and the defence secretary will soon visit US.

Calling partnership between US and India "indispensable", Wendy Sherman at USIBC event explained, "many of the challenges we face...can't be solved by anyone nation alone. It takes, it will take the 2 largest democracies in the world, India and the US to meet those challenges"

During the meeting, both saw "meetings of mind" on Afghanistan. While legitimacy to Taliban  did came up during talks it is unlikely that the US would take any call as the situation was still evolving.

Taliban has gone back on many of its promises. The promises included forming an inclusive government. There is no representation to women and minorities.

Pakistan's support for terrorism remained New Delhi's concern and it had a good understanding with US on this.

Sources pointed out that, "India and US are speaking from the same page" when it comes to Islamabad's continued support to terrorism. Indian side also mentioned how terror groups from Pakistan are moving into Afghan territories. Fear remains that Afghanistan could become a safe haven for terrorists under Taliban rule. Of more than 30 members of Taliban cabinet, 17 are on the United Nations terror list.

Topic of China was also part of the discussion between the two sides. New Delhi gave its assessment, particularly on developments at Line of Actual Control. US mentioned talks in Geneva, and its policy towards Beijing-- the 3C-- Compete, Cooperate and Challenge. The talks also saw some discussion on India-South Africa proposal on patent wavier on Covid vaccines at WTO, for which Washington reiterated its support. Interestingly, there was no mention of the AUKUS deal between US, UK and Australia which riled up France. Under the deal Australia gets nuclear submarines, a development that comes amid increasingly assertive moves from China.

In Delhi, the US deputy secretary of state also met India's External Affairs Minister Dr S Jaishankar and NSA Ajit Doval. A state dept readout said, "They discussed regional developments, including in Afghanistan, Myanmar, and the People’s Republic of China".