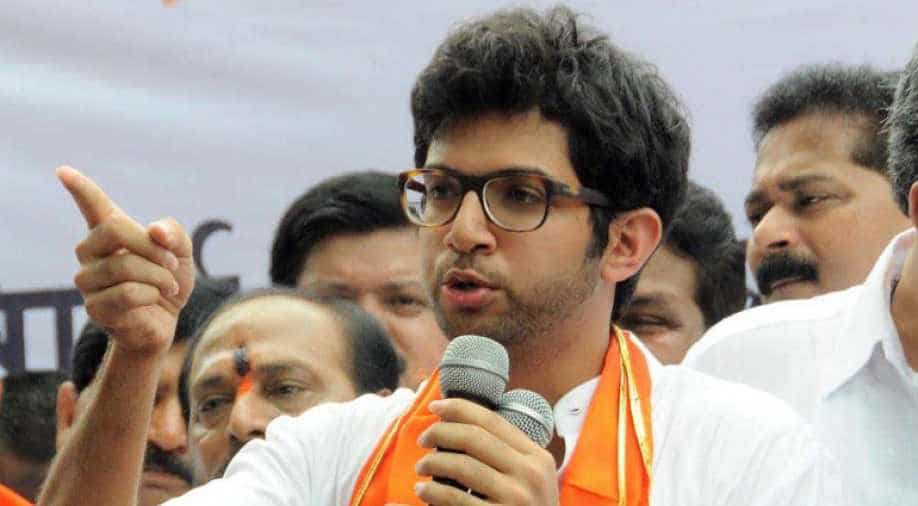 Maharashtra state minister and Shiv Sena's youth leader Aaditya Thackeray was tested positive for COVID-19. Informing the public through his Twitter handle on March 20, the minister tweeted, "On having mild symptoms of COVID, I had myself tested and I am COVID positive. I request everyone who came in contact with me to get themselves tested". Photograph:( Others )

On the way to file his candidature, Aditya Thackeray was given a rousing welcome, hundreds of Shiv Sena members accompanied him to the nomination centre in Worli.

With Maharashtra election roughly a month away, the state's far-right Nationalist party- Shiv Sena got its first 'Thackeray' as an electoral candidate. Aditya Thackeray, the 29-year-old grandson of Shiv Sena's founder Bal Thackeray filed his nomination in the presence of younger sibling Tejas, parents Uddhav and Rashmi Thackeray today.

On the way to file his candidature, Aditya Thackeray was given a rousing welcome, hundreds of Shiv Sena members accompanied him to the nomination centre in Worli. Dancing alongside his open jeep, fans and supporters were also seen showering flower petals on their young leader's cavalcade.

Having entered active politics in 2009, Aditya Thackeray will contest from South Mumbai's Worli constituency. Considered a safe bet for the Sena, Worli has a total strength of 2,68,932 voters.

The assembly constituency is a high-end residential locality, home to the rich and famous, surrounded by plush business parks. A sizeable number of Mumbai's original inhabitants- the Kolis reside along the Worli sea face- a popular seaside promenade.

Shiv Sena's first poster of Aditya Thackeray that went up on the roads around his constituency read "Hello Worli" in various Indian languages. The party's move to put multilingual posters all across the constituency was viewed as an attempt to move away from regional politics it has long stayed loyal to.

With a young leader from the Thackeray clan being projected at the helm of affairs, the Sena is changing its messaging to appease all communities, thereby ensuring a greater victory margin for its star debutant.

October 4 being the last day for filing nominations, so far no other political party has fielded any candidate against Aditya Thackeray from the same constituency. This has further bolstered the party's confidence for an easy win.

Mandatory upon all candidates running for public office, the nomination process requires declaring assets owned by politicians in the election form affidavit. The details are for voters to know the source of the politician's wealth.

Aditya Thackeray declared assets worth over Rs 16 crore. As per the nomination form, he has bank deposits of Rs 10.36 crore, bonds/shares/mutual funds of approximately Rs 97 lakh, jewellery worth around Rs.1 crore, immovable properties worth Rs 4.67 crore, other investments worth Rs 10.22 lakh and cash in hand Rs 13,344.00.