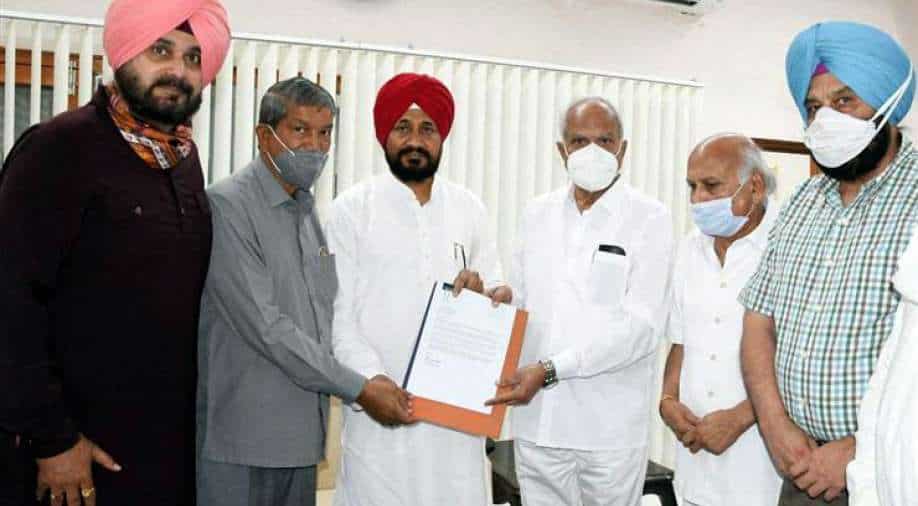 India's Congress party on Sunday picked Charanjit Singh Channi as the next chief minister of northern Punjab state, making him the first lower-caste Dalit to hold the post in the state, a day after Amarinder Singh resigned following a bitter power tussle in the party.

AICC general secretary Harish Rawat said in a tweet, "It gives me immense pleasure to announce that Sh. #CharanjitSinghChanni has been unanimously elected as the Leader of the Congress Legislature Party of Punjab."

The BJP had earlier announced that if voted to power in Punjab, it will make a Dalit the chief minister, while the SAD, which is fighting the coming polls in alliance with the BSP, had said that its

Deputy Chief Minister would be from the Dalit community.

Speaking to reporters after meeting the governor, Channi said he was elected the CLP leader unanimously.

"The oath-taking ceremony will take place at 11 am on Monday,? said Channi, flanked by Sidhu and other leaders.

Channi is a three-time legislator from Chamkaur Sahib assembly constituency in Rupnagar district.

He was holding the portfolio of Technical Education, Industrial Training, Employment Generation, Tourism and Cultural Affairs in the outgoing Amarinder Singh-led cabinet.

Amarinder Singh said he hopes that Channi is able to keep "the border state of Punjab safe".

"My best wishes to Charanjit Singh Channi. I hope he's able to keep the border state of Punjab safe and protect our people from the growing security threat from across the border," he said.

Congress leader Rahul Gandhi congratulated Channi and said, "We must continue to fulfil the promises made to the people of Punjab. Their trust is of paramount importance."

Earlier, senior Congress leader Randhawa was said to be the frontrunner for the post.

However, after Channi's name was announced, Randhawa said, "I welcome the decision of the party high command."

Another senior leader, Brahm Mohindra, too welcomed the election of Channi, who is considered close to state Congress chief Navjot Singh Sidhu.

The name of former Punjab Congress chief Sunil Jakhar was also doing the rounds as next CLP leader.

Central leaders Harish Rawat, Ajay Maken and Harish Chaudhary who have been camping at a hotel here held discussions with the MLAs and took their feedback before the CLP leader was picked.

The 79-year-old Amarinder Singh, one of the Congress' powerful regional satraps, had put in his papers after speaking to the Congress president and shortly before a crucial meeting of the CLP here on Saturday evening.

He had later launched a no-holds-barred attack against Sidhu, describing his bete noire, a cricketer-turned-politician, as a "total disaster".