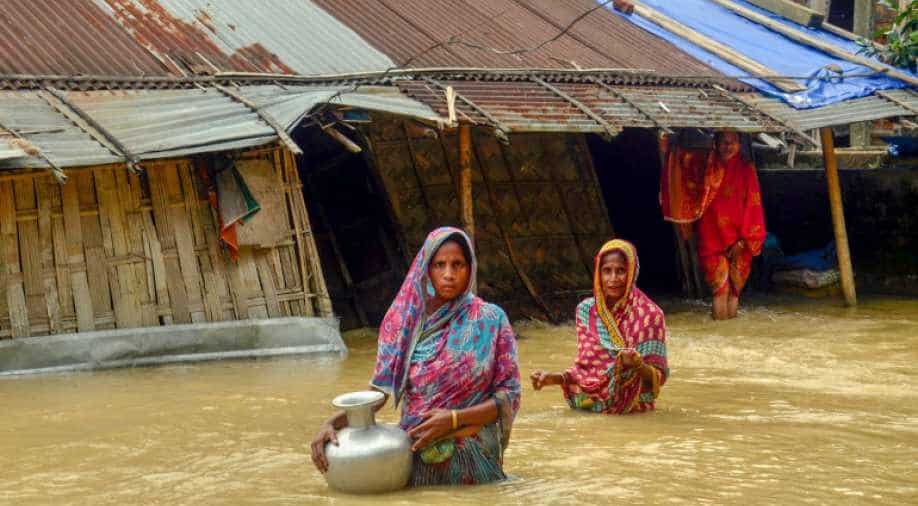 Villagers carry clean water as they wade across flood-affected areas at Nilambazar village, in Karimganj on Sunday, June 17, 2018. Photograph:( PTI )

Union Home Minister Rajnath Singh assured Assam Chief Minister Sarbananda Sonowal of all assistance from the Centre to tide over the situation in the state even as the flood scenario continued to remain grim.

Over 63,000 people are still affected by the floods across five districts, with the MeT department forecasting more rainfall in the state in the coming days, according to news agency PTI.

The death toll stood at 32 with no casualty being reported today.

The home minister spoke to Sonowal over phone and took stock of the flood situation in the state, a home ministry official said in New Delhi.

Singh told the chief minister that all possible support is being provided to Assam and other northeastern states for overcoming the flood situation, the official was quoted as saying.

The Assam State Disaster Management Authority (ASDMA) in its latest report said 63,300 people are at present affected by the floods in Lakhimpur, Jorhat, Sivasagar, Charaideo and Karimganj.

Till yesterday, around 67,000 people were hit by the floods.

Lakhimpur is now the worst-hit district with nearly 32,000 being affected, followed by Charaideo with around 29,000 flood-hit people, the ASDMA report said.

It said 74 villages are under water and 902 hectares of cropland have been damaged.

The authorities are running 26 relief camps and distribution centres in the affected districts.

The Desang river at Nanglamuragat in Sivasagar, the Dhansiri river at Numaligarh in Golaghat and the Jia Bharali river at NT Road Crossing in Sonitpur are flowing above the danger mark, the report said.

The weather office forecast heavy to very heavy rainfall in the next four to five days at isolated places in Assam.