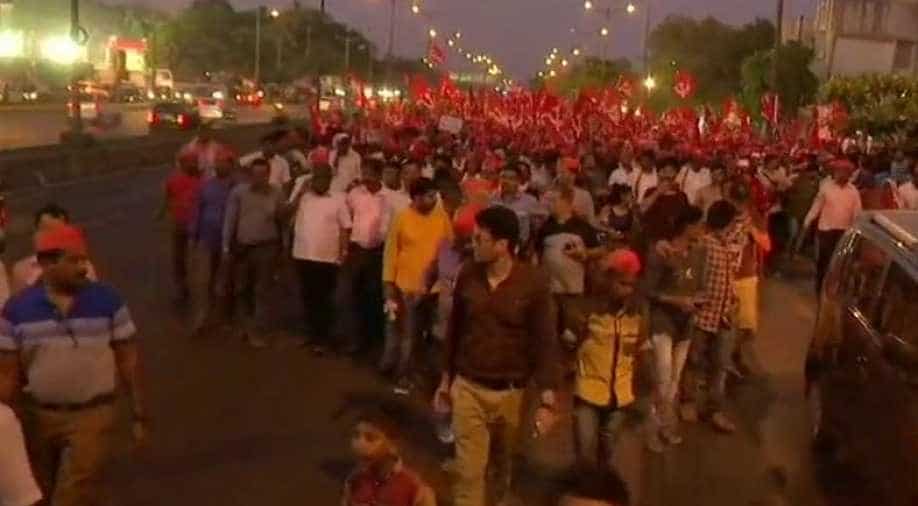 A committee of six ministers has been appointed to look into the matter of the farmers' protest in Maharashtra.

Earlier Aditya Thackeray from the Shiv Sena interacted with the farmers protesting in Mumbai.  Leaders from opposition parties such as Congress, Nationalist Congress Party have also extended their support to the farmers.

#Mumbai: Shiv Sena's Aditya Thackeray met farmers of All India Kisan Sabha and interacted with them. Over 30,000 farmers marched from Nashik to Mumbai demanding a complete loan waiver among other demands. #Mahrashtra pic.twitter.com/Vl6MsqTRgG

In a single day, the numbers of the farmers protesting in Maharashtra swelled to 50,000.

Some 35,000 farmers had reached Mumbai on Sunday demanding, among other things, a complete loan waiver.

Their other demands include higher prices for their produce and implementation of the Swaminathan Committee recommendations. Longtime cultivators of Adivasi land also demanding transfer of the land to their names.

The farmers who reached Mumbai today were received by Girish Mahajan, a senior minister in the Maharashtra cabinet in Mulund in suburban Mumbai.

They plan to gherao the Vidhan Sabha on Monday.

The farmers' had marched to Mumbai from Nashik, with the 180-km-long march being led by All India Kisan Sabha National President Ashok Davle, local MLA JP Gavit and other leaders.

They are protesting against the Maharashtra government which had promised loan waiver for them in November 2018 after they had staged a long protest of over 10 days in the state.