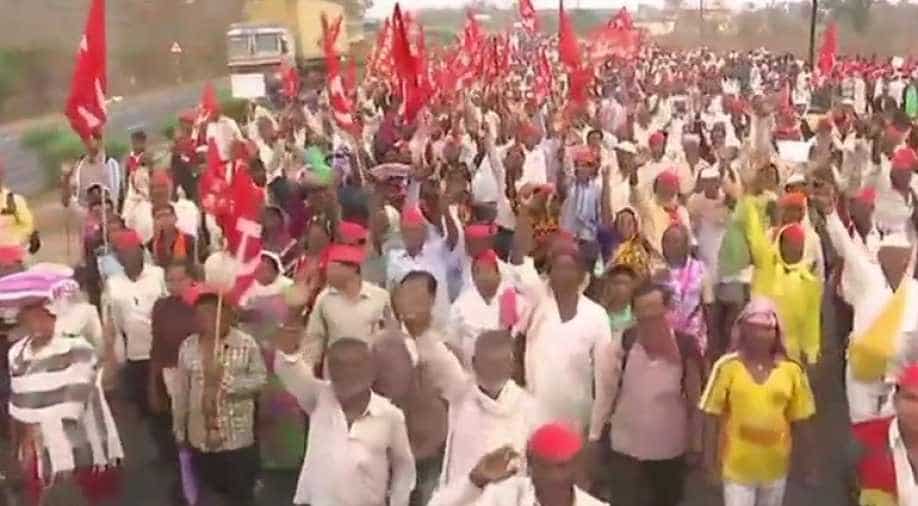 The protestors are demanding the implementation of recommendations of the Swaminathan Commission Photograph:( ANI )

Nearly 30,000 farmers in Maharashtra, marching from Nashik to Mumbai to protest what they term as government's anti-farmer policies, reached Thane on Friday morning.

Davle claimed that 1,753 farmers have killed themselves since June last year when the BJP-led state government announced a conditional farm loan waiver of Rs 34,000 crore.

#Maharashtra: All India Kisan Sabha protest reaches Thane. More than 30,000 farmers from across the state of Maharashtra are heading towards Mumbai from Nashik demanding a complete loan waiver for the farmers of the state. The march will reach Mumbai on 12th March. pic.twitter.com/pvadOFrxQr

Apart from seeking a complete waiver of farmers' loans and electricity bills, the farmers are demanding the implementation of recommendations of the Swaminathan Commission, which addresses issues of providing minimum support prices (MSP) and safeguarding interests of small farmers.

Davle accused the BJP government of having betrayed farmers. He said that promises made have remained unfulfilled.

He is also demanding transfer of forest land to those who have been tilling it for years and an increase in the compensation for peasants whose crops were damaged in the recent hailstorms and pink bollworm infestation.

Farmers and farm labourers in large number from various districts of the state gathered in Nashik city before setting off on a six-day ‘long march’ to Mumbai on Tuesday afternoon.

They aim to reach Mumbai by Monday and gherao the Maharashtra Vidhan Sabha on March 12.

The Devendra Fadnavis government has been under immense pressure after continuous protests by farmers who alleged that he did not honour assurances given to farmers for a farm loan waiver of Rs. 34,000 crore in June last year.