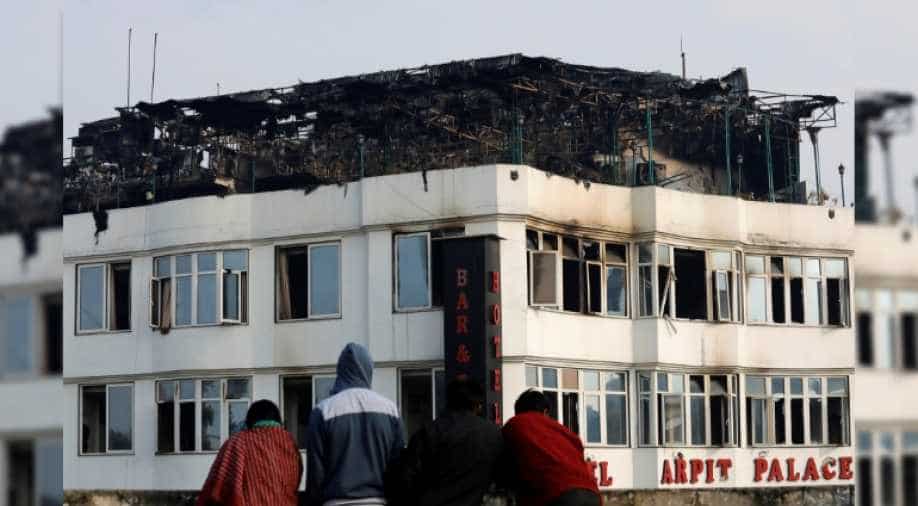 At 3.30 am on Tuesday, Somshekhar and his family were preparing to leave their hotel for Haridwar. Suddenly, the power went out and their rooms plunged into darkness. Before they could understand what had happened, plumes of thick smoke ran through their floor at the Arpit Palace hotel and a foul smell triggered panic.

Besides Somshekhar, 12 persons were in the group staying at the hotel in central Delhi, where a massive fire killed 17 people, including a child, on Tuesday.

The family had come from Ernakulam district in Kerala to attend a wedding in Ghaziabad on February 8.

"We had come to attend the wedding of a relative in Ghaziabad. We were planning to go to Haridwar today," the 57-year-old said.

"We were ready to leave when there was a sudden power cut. They switched on the generator and there was a cloud of heavy smoke and a foul smell. My sister first spotted the smoke and informed us. The entire corridor was full of smoke and the smell," Somshekhar said.

His mother and brother were with his sister at that time and Somshekhar had rushed to his room to open the windows to allow the smoke to pass and find a possible exit route.

"Yesterday, we went to Vrindavan and returned late at night. We had also planned to visit Amritsar and leave for Kerala on the 15th," he said.

Vijayamma, a relative of Somshekhar, said, "I met the entire family at the wedding. I was meeting Naliniamma after about three years. She was finding it difficult to cope with the winters here. I took her to a room after the wedding. I did not know that I would be seeing her the last time."

Shivanand Chand, an advertising professional from Mumbai, was on the fourth floor of the hotel when the fire broke out.

Chand said they were choking and stayed by the window to be able to breathe, adding that some people chose to jump out of the window.

A relative of Rabia Jusafbhai, a 52-year-old lawyer who died in the tragedy, said the deceased was here with a male colleague on official work.

Tulsi Ram said his younger brother Lal Chand had been working at the hotel for the last 25 years and he was a supervisor. He had left for work at 8 pm on Monday and it was his son Himanshu who first got to know about the incident. Since then, they have been looking for Lal Chand at various hospitals.

Himanshu Thakur (20), son of Lal Chand, said he was going to college when he got to know about the incident. He tried calling his father but his phone was switched off.

"We went to at least five hospitals, but still could not trace him," he said.
A 58-year-old man from Ahmedabad woke up to see smoke entering his room from the corridor.

"At around 4 am, I heard people screaming for help. When I opened the door, I saw a dense smoke on the corridor and rushed out of the room," Dilip Trivedi, who had come to Delhi for a business deal, said.

"I had booked another hotel, but as there were no rooms there, they had shifted me to this hotel. I was staying in room number 101 on the first floor," Trivedi said.

Bhupendra Rajput, an eyewitness who assisted in the rescue operations, said, "We were in my room at a hotel nearby when the incident took place. People were shouting and we immediately rushed to the spot."

"There was a stampede as the stairs were narrow. We pulled them out and helped to clear the way for others. Pillows were used to give support to those coming out of the hotel windows," he said.

According to Rajput, the roads near the hotel were blocked, due to which the fire tenders took time to reach the spot. "The first fire tender to arrive did not have adequate water. If that had adequate water, it would have taken less time to bring the blaze under control," he said.

Neelam Krishnamoorthy, whose two young children were among the 59 people who were killed in a fire accident at the Uphaar cinema hall here in 1997, said, "No lessons have been learnt from the Uphaar tragedy."

There were over 50 guests at the hotel, which had a canopy on the terrace housing what appeared to be a restaurant, officials said.

At least 35 people were rescued.

A senior civic official said a suspected short circuit could have sparked the fire.

A video of the incident showed two persons jumping off the fourth floor of the building.

Delhi Home Minister Satyendar Jain, who visited the hotel, told reporters he had directed the fire department to inspect the buildings that had five floors or more and submit a report on their fire-safety compliance within a week.

Babu Panikar, head of the Delhi Malayali Association, said, "I got to know that Malayalis were trapped inside. I rushed to the spot to check on them. There were 13 members of a family who had come from Ernakulam to attend a wedding in Ghaziabad.

"Ten of them were rescued safely, while the bodies of the remaining three have been identified. They were supposed to leave for Haridwar at around 6 am on Tuesday. Two of the family members had left for Mumbai on Monday."