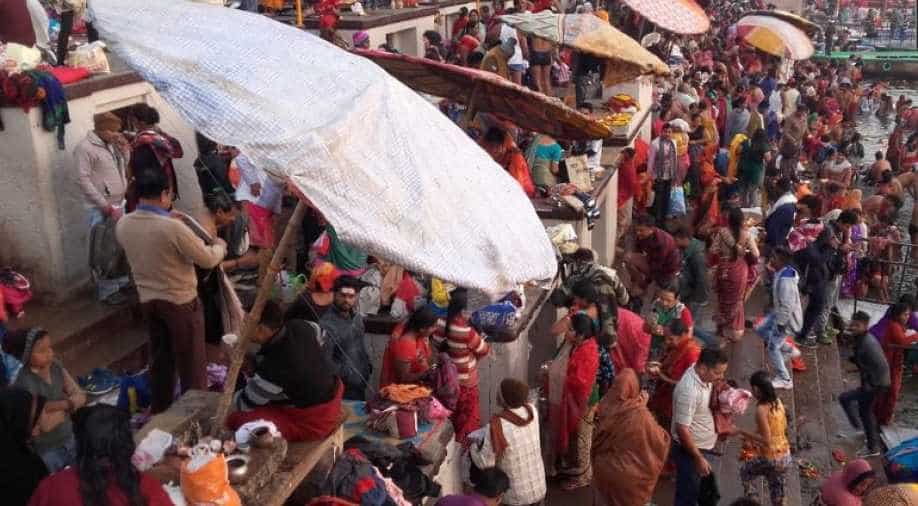 Makar Sankranti, which marks the beginning of the festival, is one of the sacred days of the 50-day Kumbh Mela.

The sacred baths began at break of dawn as the sun rose faintly over the horizon and went on through the day till the last rays set over the Sangam, the chants of "Har Har Gange" reaching a crescendo as lakhs of people took a dip to mark the beginning of the Kumbh Mela on Tuesday.

By end of day, about 1.4 crore people had taken the ritual bath in the holy waters of the Sangam here, administration officials estimated.

Makar Sankranti, which marks the beginning of the festival, is one of the sacred days of the 50-day Kumbh Mela.

The confluence of the Ganga, Yamuna and the mythical Saraswati has called out to the religious for centuries and Tuesday was a continuation of an ancient ritual that has stood the test of time, history and modernisation.

Undeterred by the cold, a couple with their hands held tight stood waist deep in the river, a woman, her hands cupped, offered water to the rising sun, an ascetic took a dip with his eyes closed in veneration while a group of children frolicked nearby.

It was about religious fervour, spirituality, love and even fun at the 'Shahi Snan' (royal bath) on Makar Sakranti as devotees, ascetics and religious leaders of various orders gathered for the largest congregation in the world.

People from lands near and far braved the cold weather to take a dip in the icy waters, reaching the makeshift township of Kumbh Nagari, touted to be the world's biggest temporary city, as early as 4 am.

Sadhus of 13 akharas (seven Shaiva, three Vaishnava, two Udasina, and one Sikh) who have traditionally participated in the Kumbh Mela were the first to take the holy bath.

They marched in a procession, dancing and singing devotional songs, all the way to the waters. Each akhara, the term for an organisation of sadhus, was allocated 45 minutes to participate in the ritual bath by the Kumbh administration.

Attracting eyeballs of one and all, especially foreigners, was the march of the Naga sadhus, a martial order of ascetics who roam naked with ash smeared on their bodies.

"It is surreal. I had always heard about them. In fact, one of the reasons we wanted to come to the Kumbh was to see them in real as we are told that this is the only festival in which they arrive in numbers," said Manuel Matthaus, who had come from Germany.

"Yes, I did plan to take the bath. But I guess the water now is too freezing for my liking. Maybe later," as his girlfriend captured the spectacle on her camera.

More than 12 crore people are expected to visit the Kumbh between now and Maha Shivratri on March 4.

It is traditionally called 'Ardh Kumbh' as it takes place twice in 12 years. But the present Uttar Pradesh government recently renamed it 'Kumbh'.

In 2013, according to a recent book 'Kumbha: The Traditionally Modern Mela', one in 10 Indians attended the grand religious event. The state government expects the number to be higher this time.

The Uttar Pradesh government has allocated Rs 4,200 crore for the Kumbh Mela, which is more than thrice the budget of the Maha Kumbh in 2013, making the mega pilgrimage perhaps the costliest ever.

"The UP government has allocated Rs 4,200 crore for 2019 Kumbh Mela. The previous state government had spent around Rs 1,300 crore for the Maha Kumbh, which was held in 2013," state Finance Minister Rajesh Agarwal told PTI.