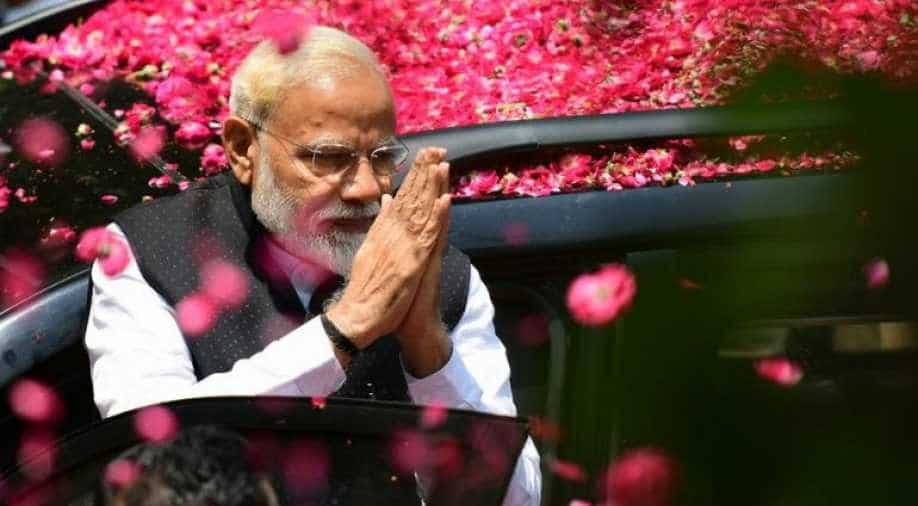 Wishes from all across the world poured-in for Narendra Modi for his re-election for the second consecutive term in the country.

From tweets to phone calls to letters, global leaders made a beeline to congratulate Prime Minister Modi.

Over 20 world leaders congratulated PM Modi for his victory.

Leaders from all South Asian countries extended wishes to PM Modi with Sri Lankan leadership being the first and Pakistan being the last via a tweet from Pak PM Imran Khan.

According to the Ministry of External Affairs readout, during the conversation, "Both leaders noted the advances made in the bilateral relationship in the last five years"

PM Modi will be in Japan in the last week of June for the G20 Osaka Summit while Japanese PM will come to India later this year for the next India-Japan Annual Summit.

He lauded PM Modi's mandate and said, "The election results further reaffirm your leadership of the world's largest democracy."

Another leader from West Asia to congratulate PM other than Israel was the United Arab Emirates. Crown Prince Mohammed bin Zayed Al Nahyan made a phone call to PM Modi. UAE in April had honoured PM Modi with Zayed Medal, the highest civil honour of the country.

PM Modi will visit France in August 2019 for a bilateral meeting and will also attend the G7 Summit at Biarritz.

China was quick to congratulate PM Modi with Chinese President Xi Jinping writing a letter to him. While congratulating PM Modi for re-election, Jinping said, "China-India relations have shown strong momentum of development under the joint efforts of both sides".

In the letter, President Xi noted the great importance he attached to the development of Indo-Chinese relations and his desire to work with Prime Minister Modi to take "Partnership between the two countries to a new height."

Congratulation letter from H.E. Mr. #XiJinping, President of the People’s Republic of #China, addressed to Shri. #NarendraModi for the #NationalDemocraticAlliance winning the 17th Lok Sabha election of #India. pic.twitter.com/FKFduaDarM

Chinese President Xi Jinping and PM Modi met four times in 2018 starting with the famous informal summit in Wuhan in April 2018. Jinping will be visiting India this year for the second informal summit.

Russian President Vladimir Putin also wrote a letter to PM Modi wherein he said, "As the Prime Minister of the Republic of India you will further contribute to strengthening the centuries-old friendship between our people". He further reiterated his "readiness to continue fruitful personal contacts".

#Russian President Vladimir #Putin made a telephone call to Prime Minister of #India @narendramodi to congratulate him on the resounding victory of #BJP in the general parliamentary elections.

May last year saw the first informal summit between PM Modi and Vladimir Putin in the resort town of Sochi. Later that year, Putin visited India for the annual summit.

The US also congratulated PM Modi on his victory.

"Great things are in store for the US-India partnership with the return of PM Modi at the helm" Trump tweeted on Modi's victory.

The US envoy  Ken Juster while congratulating PM Modi said, "The United States looks forward to working closely with our strategic partner India in the years to come."

In a tweet, Australian PM said, "Australia and India enjoy a strong, vibrant and strategic partnership" and he looks forward to meeting him.

In fact, it was a South Asian leader to first congratulate PM Modi with a tweet. Sri Lankan Prime Minister Ranil Wickremesinghe was the first world leader to tweet congratulations at 12.34 pm IST.

In a tweet, he said, "Congratulations to @narendramodi on a magnificent victory! We look forward to working closely with you".

By 1 PM IST, all three top leaders of Sri Lanka - The President, PM and Leader of opposition had tweeted congratulations.

President of Sri Lanka Maithripala Sirisena tweeted his country "looks forward to continuing the warm and constructive relationship with India in the future".

While the opposition leader Mahinda Rajapaksa said, "Both our nations will build on the existing strong bilateral relationship that we share".

The Sri Lankan Prime Minister also wrote a letter to PM Modi in which he extended "warmest congratulations" and "sincere best wishes on the victory of the Bharatiya Janata Party at the recent general elections of India and your reassumption of the high office of Prime Minister of India".

I, on behalf of the people of Bhutan, offer heartiest congratulations to Prime Minister Shri Narendra Modi @PMOIndia and his team on the election victory. As we look forward to working closely in years to come, we pray India achieves greater success under your leadership.

On PM Oli's call to PM Modi, Ministry of External Affairs in a readout said, " PM Modi thanked PM Oli for his warm words of felicitations and reaffirmed India’s commitment to strengthen the bonds of India-Nepal friendship."

In her congratulatory message to Narendra Modi, Bangladeshi PM Sheikh Hasina said, “I strongly believe that with the renewed mandate given to both of us by our respective peoples, Bangladesh-India ties, which have already been termed as a role model of good neighbourliness, will be further consolidated and our relations will scale newer heights”.

Hasina herself got landslide victory herself during elections in her country in December of 2018.

Maldivian President Ibrahim Mohamed Solih and foreign minister also congratulated PM Modi. The Maldivian President said the re election of Narendra Modi "is a strong affirmation of the Indian people's confidence in the BJP/led government"

Afghan President Ashraf Ghani while congratulating PM Modi said, "The government and the people of Afghanistan look forward to expanding cooperation between our two democracies in pursuit of regional cooperation, peace and prosperity for all of South Asia."

I congratulate Prime Minister Modi on the electoral victory of BJP and allies. Look forward to working with him for peace, progress and prosperity in South Asia

PM Modi and Pakistani PM will be under the same roof in their present capacity for the first time during next month's Shanghai Cooperation Organisation (SCO) summit in Kyrgyzstan.

During his oath-taking ceremony in his first tenure in 2014, PM Modi had invited all the leaders of SAARC countries.

Other leaders who reached out to PM Modi include Singapore's PM Lee Hsien Loong, PM of Vietnam Nguyen Xuan Phuc who sent a letter to PM Modi and PM of Portugal António Costa who tweeted congratulations to PM Modi.