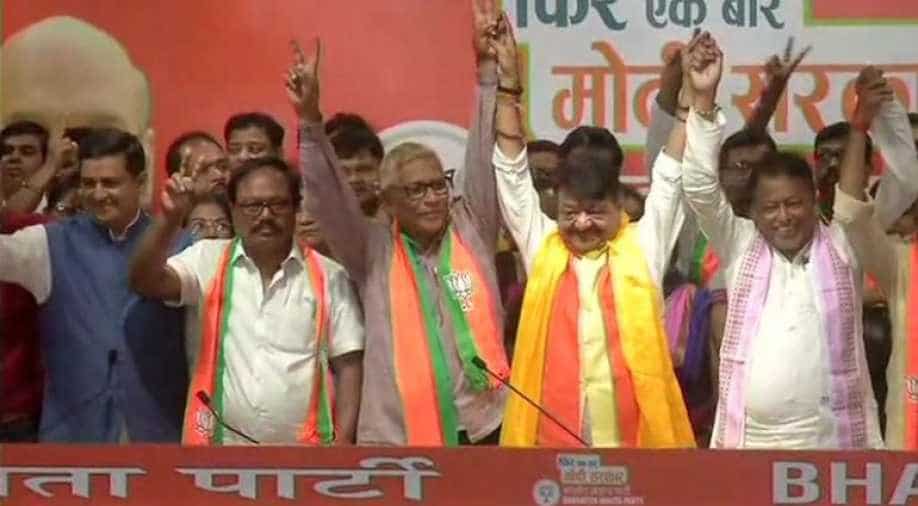 The BJP came up with a stunning performance capturing 18 of Bengal's 42 seats in the just concluded elections, as against only two it won five years back.

Led by BJP leader Mukul Roy's son Subhrangshu, who was suspended by the Trinamool for six years for "demeaning the party", a large number of MLAs and councillors reached Delhi where they accepted BJP membership in the presence of Party President Amit Shah.

Kailash Vijayvargiya, BJP National General Secretary on 3 MLAs and more than 50 Councillors from WB joining BJP: Like the elections were held in seven phases in West Bengal, joinings in BJP will also happen in seven phases. Today was just the first phase. pic.twitter.com/YbYEYK2KwU

Mukul Roy claimed in Delhi that the BJP could take control of up to 60 municipalities in the near future.

"I feel in the next two-three months the BJP will wrest 55-60 municipalities in the state," he said.

"More than 20 women councillors are here in Delhi. We are not upset with Mamata Ji (Banerjee) but BJP's massive gains in Bengal has influenced us to join the party. People are liking BJP as they are working for them," Ruby Chatterjee, TMC councillor from Garifa, Ward no 6, told ANI.

In Lok Sabha polls 2019, BJP inflicted a massive blow to the ruling TMC by winning 18 of the 42 parliamentary constituencies, in contrast with the figure of 2 seats in the 2014 general elections.

The Mamata Banerjee-led TMC although retained the state, it won just 22 seats, as against 34 in 2014.