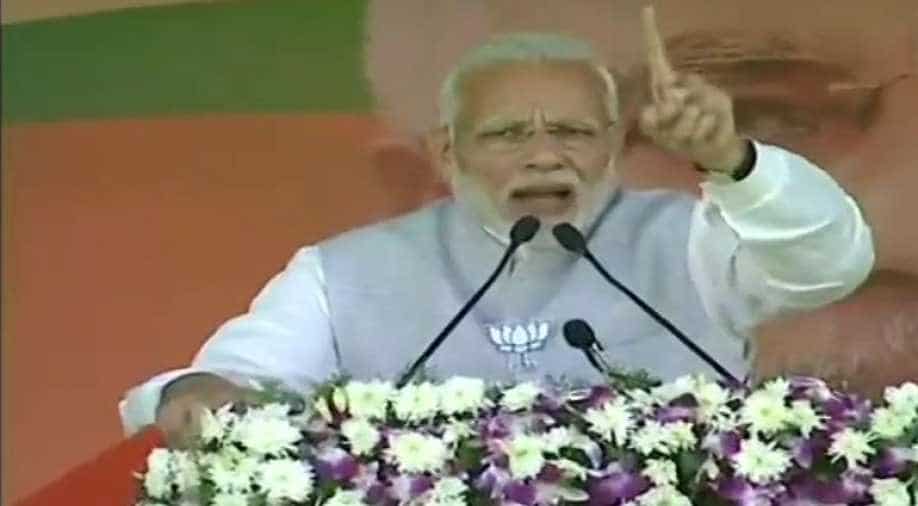 Prime Minister Narendra Modi kick started the Lok Sabha campaign for the BJP in West Bengal on Saturday by addressing a gathering of the Matua community.

PM Modi addressed the gathering at North 24 Parganas in Thakurnagar area after taking blessings from Binapani Devi, current leader of the community and widow of the founder of Matua Mahasangh Harichand Thakur. She is popularly known as 'boro ma'.

"Thakurnagar was a witness to a social movement. It is my good fortune that I've been able to speak in front of the Matua community. You have showered me with lots of love and respect. Things in Bengal will turn around for sure. Looking at the current scenario, I've now understood why Didi resorts to violence. Those who claim to be democratic are killing innocent people. There will be no syndicate tax, no obstacles. The people will directly receive the Rs. 6,000 meant for them under the new budget. The farmers can use this money to meet the expenditures needed for agriculture," said PM Modi.

"Shouldn't those who have had to come back from Afghanistan, Pakistan and Bangladesh be allowed to live respectfully in India? For them, we have introduced the Citizens Amendment Bill. But, the TMC is opposing it for no reason," he said.

Thakurnagar is a village inhabited by the Matua community who settled from Bangladesh, the erstwhile East Pakistan after a religious reformation movement led by the late Harichand Thakur. Thakurnagar falls under the Bongaon constituency, housing more than 60% Matua voters.

This vote bank was instrumental in making Mamata Banerjee win during the 2011 assembly polls and bringing her into power.

On the other hand, claiming that the budget presented on Friday will bring relief to farmers and middle income groups, PM Modi said, "Most farmers didn't receive the benefits of loan waivers. Those who did, fell into the debt trap even after that. Congress bought votes by promising farmer loan waivers. But the situation is entirely different in Madhya Pradesh and Rajasthan. Leaders haven't focused on the development of rural areas. New India cannot function in this way. The Central government is making every effort for the past 4.5 years for the development of farmers and agricultural laborers."