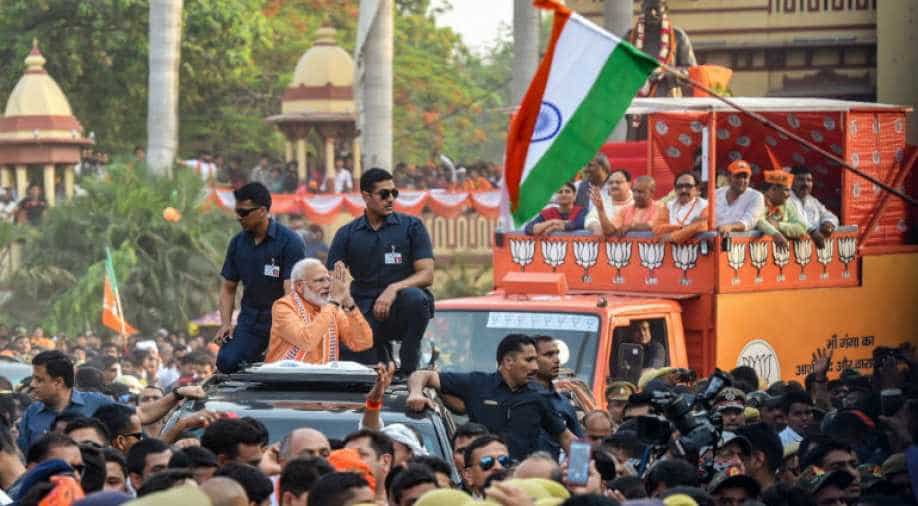 PM Modi greets supporters during his roadshow, a day before he files his nomination papers for the Lok Sabha polls, in Varanasi, on April 25. Photograph:( PTI )

The BJP is contesting 11 Lok Sabha seats in this phase, while its ally Apna Dal (Sonelal) is contesting Mirzapur, currently held by Union minister Anupriya Patel, and Robertsganj.

Voting will be held on Sunday for 13 Lok Sabha constituencies in Uttar Pradesh, which will see Prime Minister Narendra Modi seeking re-election from Varanasi.

The BJP is contesting 11 Lok Sabha seats in this phase, while its ally Apna Dal (Sonelal) is contesting Mirzapur, currently held by Union minister Anupriya Patel, and Robertsganj.

The saffron party has pitted Bhojpuri actor Ravi Kishan from Gorakhpur against Congress's Madhusudan Tripathi and Rambhual Nishad of the Samajwadi Party.

Gorakhpur MP Pravin Nishad, who had won the seat on a SP ticket in bypolls last year, has joined the BJP. The party has fielded him from Sant Kabir Nagar seat.

Gorakhpur was represented by Yogi Adityanath in the Lok Sabha from 1998 to 2017, before he became the chief minister of Uttar Pradesh.

The electioneering saw Priyanka holding two back-to-back roadshows in Kushinagar and Mirzapur during the day and Union minister Smriti Irani riding a scooty in Gorakhpur.

The final phase of the Lok Sabha polls in the state will also decide the fate of eight SP and five BSP candidates.

Over 2.32 crore voters are expected to exercise their franchise in this phase in UP. As many as 25,874 polling booths have been set up in 13,979 polling centres in the final phase, the Election Commission said.

The Samajwadi Party had won five seats with a vote share of 22.35 per cent. The BSP did not win any seat while securing 19.77 per cent votes.

The Congress registered wins on two UP seats, bagging 7.53 per cent of the votes.