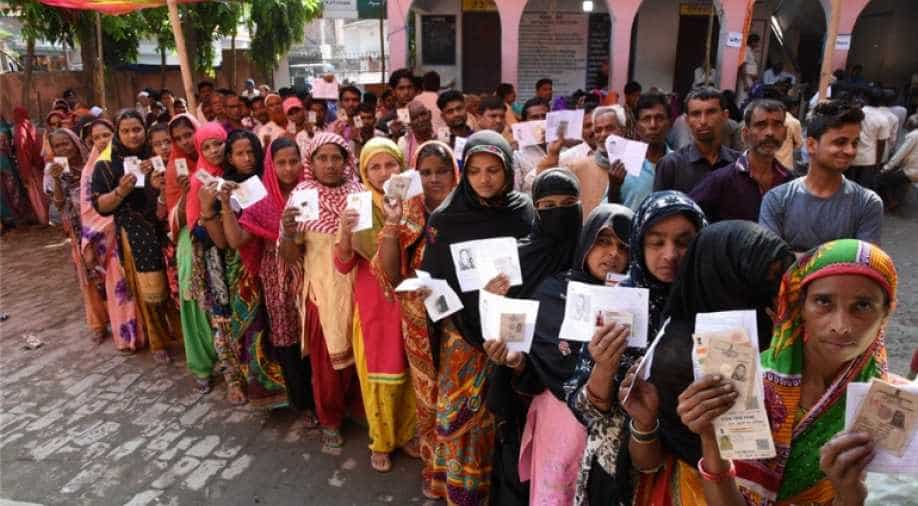 People stand in a queue to cast vote in Bihar. Photograph:( IANS )

In Delhi, reports of EVM glitches surfaced. The turnout here was recorded at 56 per cent till 7 pm.

The sixth and penultimate leg of the Lok Sabha polls recorded 63.3 per cent voter turnout on Sunday, the Election Commission announced.

As many as 14 seats in Uttar Pradesh, 10 in Haryana, eight seats each in West Bengal, Bihar and Madhya Pradesh, seven in Delhi and four in Jharkhand went to polls today.

Incidents of unrest were reported in West Bengal, despite which a whopping 80 per cent turnout was reported in the state till 7 pm.

BJP's West Bengal candidate Bharati Ghosh was attacked which the party termed as an "act of frustration" by the ruling Trinamool Congress in the state and claimed that the days of the Mamata Banerjee government are numbered.

Ghosh was allegedly attacked twice by locals on Sunday when the former IPS officer tried to visit polling stations in Ghatal Lok Sabha constituency, where she is the BJP candidate when polling was underway.

In Delhi, reports of EVM glitches surfaced. AAP's South Delhi candidate Raghav Chadha said on Sunday that voting in the city-state was a positive sign for his party but the BJP workers had done 'bogus votes' in Sangam Vihar during the sixth phase of the Lok Sabha election. The turnout here was recorded at 56 per cent till 7 pm.

Haryana, Madhya Pradesh and Jharkhand witnessed brisk polling with voter turnout at 62.91, 60.40 and 64.46 per cent respectively till 7 pm.

In Bihar, an attempt was made to attack Sanjay Jaiswal, BJP candidate from West Champaran Parliamentary Constituency, outside polling booth no. 162, 163. The state recorded 59.29 per cent turnout till 7 pm.

Uttar Pradesh witnessed the lowest turnout of all at 53.37 per cent till 7 pm. Samajwadi Party president Akhilesh Yadav and Union minister Maneka Gandhi were among key contestants in the second-last phase of polling in 14 Lok Sabha seats in Uttar Pradesh today.