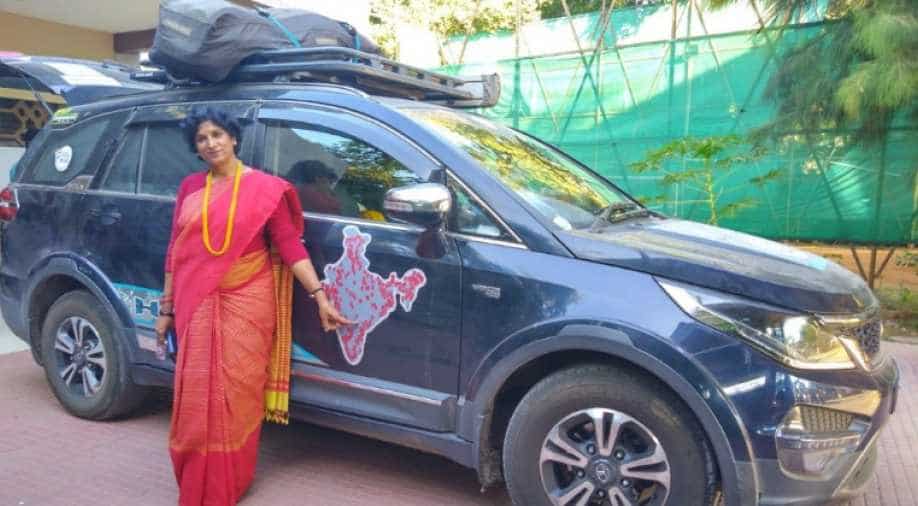 Sridhar is on a 'Swachhagraha' or the ‘Clean Indian trail’, a mission to spread the message of cleanliness and to conduct surprise checks on public toilets.

In her modified-SUV, Sangeetha Sridhar has already traversed 26 states, four Union territories and covered 41000 kilometres across India in the last 181 days. But, it’s not just another trip to explore the vastness of our country. In a conversation with WION, during her stopover in Chennai Sangeetha Sridhar shared her experiences.

Sridhar is on a 'Swachhagraha' or the ‘Clean Indian trail’, a mission to spread the message of cleanliness and to conduct surprise checks on public toilets via experiential audit and share the results with the UN Sustainable Development Board. During stopovers at different cities and villages, she delivers motivational speeches at schools and colleges on a range of topics from women empowerment to social service.

Sangeetha Sridhar grew up in Coimbatore, Tamil Nadu and later moved to the Middle-East where she has been working in the field of e-governance for over 25 years. An adventure-lover from a young age, Sridhar was inspired by the ideals of Mahatma Gandhi and her own father’s wishes to see her serve her homeland. Recalling the journey that she kickstarted from Mumbai on August 12, 2018, she said, "I picked this year (2018) as it marks the Sheikh Zayed’s 100th anniversary and Bapuji’s 150th anniversary, so I began a humble journey just like the Satyagraha".

During her journey, Sridhar conducted the audits at public toilets that dotted highways, rural areas and also crowded tourist spots. Her observations were logged on a mobile application, while she expected to cover around 100 toilets across the country, she has now audited over 220.

"Ninety-nine per cent of the time I always found a toilet when I needed one. In my observation the traditional Indian toilets are cleaner as they can be better maintained than the western ones," she said.

''In rural areas families have shown pride in owning a personal toilet, just like one would brag about a TV or sofa" she added.

For resting at night, Sridhar uses the bed which has been fitted onto the last two-rows of her SUV. When the weather turns too harsh, she depends on the kindness of people who offer her a room in their homes. Reminiscing about the warmth and love she experiences from people she never knew before, she says "in rural and semi-urban areas hospitality was outstanding, but sometimes the city-folks were apprehensive about a stranger who asked for a parking lot". 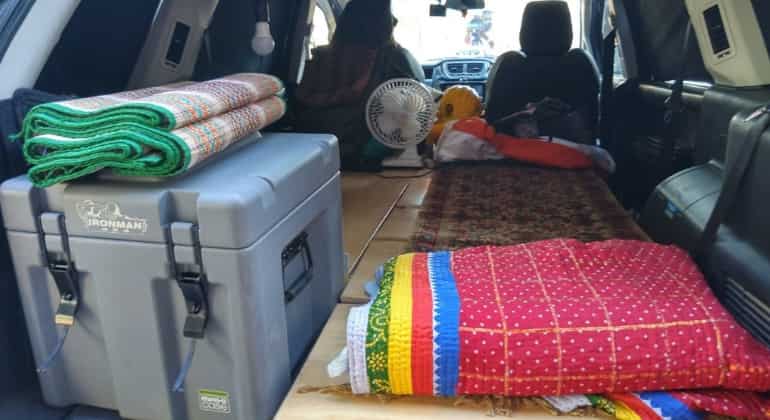 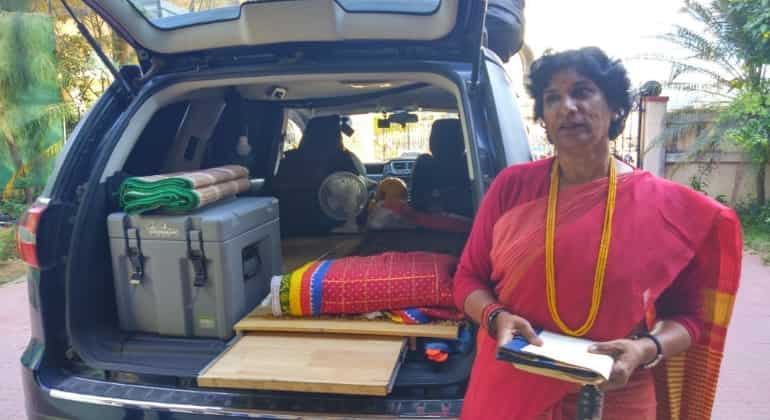 She also fondly recalls instances when she cooked South Indian dishes while being hosted by a family in the North-east region.

While crisscrossing the length and breadth of India, she says that her husband and son were of constant support and motivation.

"During the course of my trip, my son completed his higher studies in the US and started working, whereas my husband (who is in Oman) tracked my progress via the phone App and suggested places to visit". To ensure that she stays fit and alert to undertake the arduous drive, she consumed only one cooked meal a day and relied upon locally available fruits, tender coconut water for refreshments.

Currently, on the last leg of her journey, which could last another 50 days she says that "Having travelled abroad a lot, I can say that my own beautiful Bharat is much much more beautiful than any other place that I have seen abroad".

Proudly showcasing a Khukri, Bow and arrow which Sridhar received as gifts from the tribes in North-east India, she shares her philosophy of Clean India “any of the Swachh Bharat campaigns won’t succeed without individuals attitude change. We are responsible for any waste that we generate. Organic waste is wealth and composting it is important. A Clean India is our right and responsibility”.

Note: The TATA Hexa SUV she drives is sponsored by TATA Motors. She has been bearing the fuel expenses on her own.