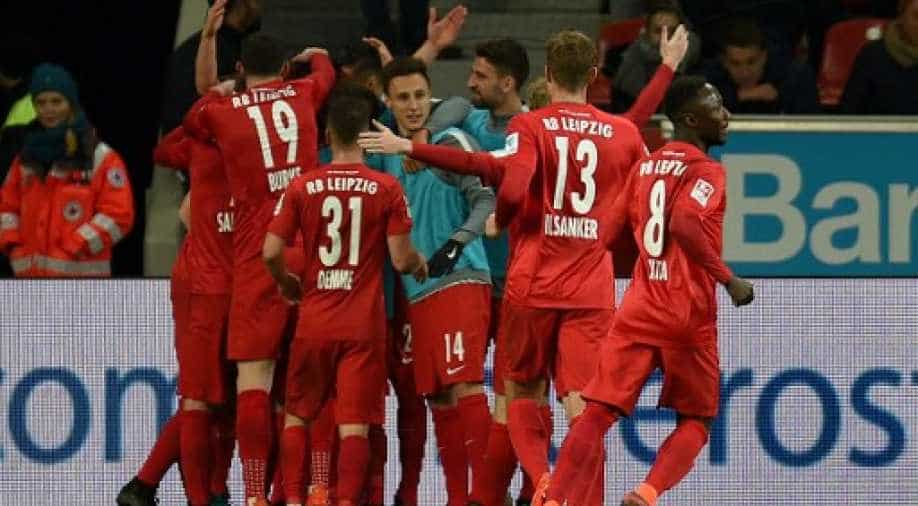 The Bundesliga new boys came out on top at Leverkusen despite trailing 2-1 and a penalty to contend with after that to maintain their 11-match unbeaten run. Photograph:( AFP )

RB Leipzig continued their fairytale run by coming from behind to win against Bayer Leverkusen 3-2 and keep the pressure on giants Bayern Munich.

The Bundesliga new boys were 2-1 down and had to save a penalty after that to remain in hunt, which they did superbly to score two goals in 14 minutes to maintain their 11-match unbeaten run.

Leipzig's win takes them three points clear of Bayern Munich, who will now have to beat a tough Borussia Dortmund on their own turf to regain the top ranking in the German first division.

"From a psychological point of view we really did very well in the second-half when we were behind twice," said Leipzig coach Ralph Hasenhuettl.

The turning point came when Brandt earned a penalty on 54 minutes only for Hakan Calhanoglu's shot to be cleared by Leipzig goalkeeper Peter Gulacsi.

Swedish international Emil Forsberg equalised for Leipzig following an impressive solo run on 67 minutes and defender Willi Orban headed in the winner on 81 minutes for the Bundesliga upstarts.

Leipzig earned their place in Germany's top flight with four promotions in seven years and have now set a Bundesliga record run for a newly promoted club by going 11 games unbeaten.