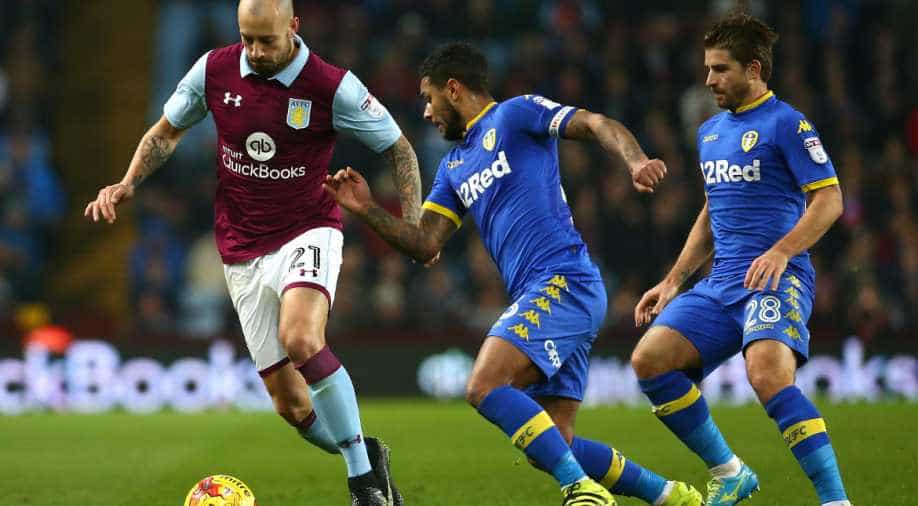 Alan Hutton of Aston Villa is tackled by Liam Bridcutt of Leeds United during the Sky Bet Championship match between Aston Villa and Leeds United at Villa Park on December 29, 2016 in Birmingham, England. Photograph:( Getty )

Jonathan Kodija converted a late penalty to earn Aston Villa a 1-1 draw with Leeds United on Thursday, maintaining his team's unbeaten home record in the Championship this season.

The Ivorian striker scored four minutes from time, after Leeds defender Liam Cooper handled, to cancel out the opening goal of the night by Pontus Jansson.

Fourth-placed Leeds climbed above Huddersfield Town on goal difference with 42 points from 24 matches while Villa rose one spot to ninth on 35. Brighton and Hove Albion lead the way on 51 ahead of Newcastle United on 49.

Swede Jansson broke the deadlock in the 54th minute when he slipped his marker at a corner and rose to head powerfully into the net.

The defender, on loan from Torino, almost struck again a minute later when he hit the bar with a half volley.

The draw ended a run of three straight wins for Garry Monk's Leeds and a sequence of five successive home victories for Steve Bruce's Villa.