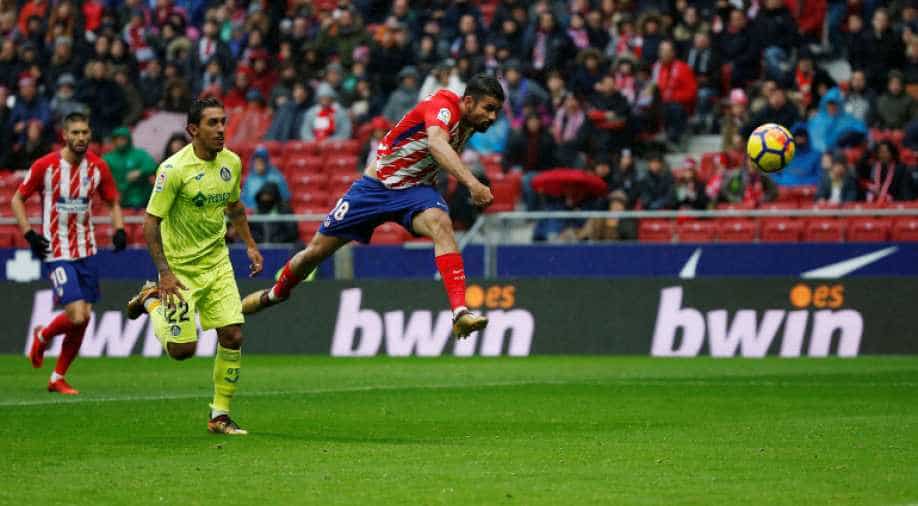 Leaving the pitch to celebrate with the fans automatically incurs a booking and, as Costa had already been shown a yellow card for elbowing Djene Dakonam, referee Jose Luis Munuera Montero had no choice but to send him off. Photograph:( Reuters )

Atletico Madrid's Diego Costa scored on his home debut in a 2-0 win over Getafe and was immediately sent off for an over-zealous celebration as the former Chelsea striker marked a typically eventful return to La Liga on Saturday.

Real Betis beat fierce city rivals Sevilla for the first time in the league since 2012 by winning a thrilling derby 5-3 away from home as Vincenzo Montella lost his first game as a coach in La Liga.

Elsewhere, Valencia hit back from two straight defeats by coming from behind to beat Girona 2-1 and hold on to third place in the standings in coach Marcelino's first game back in the dugout after being involved in a serious car crash before Christmas.

Atletico are second on 39 points, six behind leaders Barcelona who host Levante on Sunday. Valencia are third with 37 while Real Madrid, who visit Celta Vigo on Sunday and have another game in hand, are fourth on 31.

Angel Correa had put Atletico ahead against Getafe in the 18th minute while Costa sent the fans in the Wanda Metropolitano stadium into delirium by scoring the second goal in the 67th, creating a mini-surge as supporters ran down to embrace their returning hero who also played for the club from 2010-2014.

Leaving the pitch to celebrate with the fans automatically incurs a booking and, as Costa had already been shown a yellow card for elbowing Djene Dakonam, referee Jose Luis Munuera Montero had no choice but to send him off.

Costa, who returned to Atletico from Chelsea for 57 million pounds ($77 million) in September but could not play until January due to a ban on the club registering new players, will be suspended for Atletico's next Liga game at Eibar.

The 29-year-old had scored his first goal in his second spell at Atletico in a 4-0 win at Lleida Esportiu in the King's Cup on Wednesday less than six minutes after coming on.

Costa was a heroic figure at Atletico's old home the Vicente Calderon for firing them to their first league title in 18 years in 2014 and he brought much-needed aggression to their front line.

Atletico coach Diego Simeone had no complaints about Costa's sending-off.

"I'd like to focus on all the good things Costa did, his presence made us more direct, he strikes fear into opponents, everyone can see that and that makes us all so happy," Simeone told reporters.

"The referee is here to follow the rules and not make emotional decisions."

Sevilla coach Montella, who was sacked by AC Milan in November, got off to a nightmare start in La Liga game as his new team were beaten at home for the first time in any competition since November, 2016.

Betis, who scored five goals for the first time ever against Sevilla, struck in the opening minute through Fabian Ruiz. They lost their lead twice before halftime but went 4-2 ahead in the second half through Riza Durmisi and Sergio Leon.

Clement Lenglet's goal made for a nail-biting finish but Cristian Tello sealed victory for Betis with a counter-attack goal in stoppage-time, taking his side up to eighth in the standings.

"No-one can rest tonight, anyone who gets home before five in the morning should be fined."