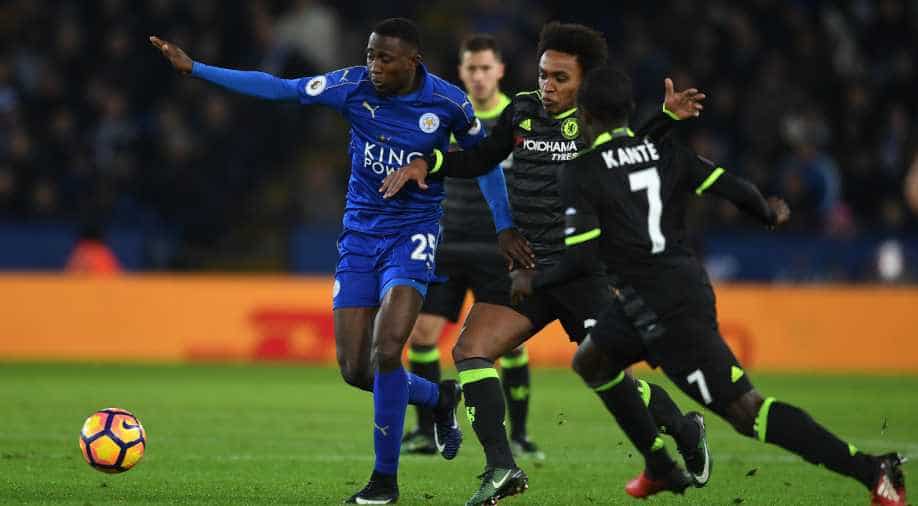 In photo: Wilfred Ndidi of Leicester City is challenged by Willian and N'Golo Kante of Chelsea on January 14, 2017. Photograph:( Getty )

Chelsea made light of Diego Costa's controversial absence as the Premier League leaders cruised to a 3-0 win at reigning champions Leicester City on Saturday.

Wing-back Marcos Alonso was their unlikely goal hero with a brace -- just his second and third goals for the club -- either side of half-time before fellow Spaniard Pedro Rodriguez completed the scoring.

That gave Antonio Conte's men a comfortable win despite the absence of leading scorer Costa amid widespread reports of a training-ground row with fitness coach Julio Tous.

The Brazil-born Spain striker is also thought to be the subject of interest from China, although Conte claimed before kick-off that his omission from the squad was down to a back injury.

Victory was Chelsea's 14th in 15 Premier League games and was the perfect response to their 2-0 defeat at Tottenham Hotspur, while for Leicester it was the 10th defeat of a sorry title defence.

Chelsea remain strong favourites to replace Claudio Ranieri's side as champions after extending their lead over second-placed Tottenham to seven points.

In the opening moments Leicester gave the visitors a scare when Ahmed Musa, fresh from two FA Cup goals at Everton last week, got the better of Cesar Azpilicueta in the Chelsea penalty area.

His cross-shot was parried by Thibaut Courtois in the Chelsea goal and Jamie Vardy could not bring the rebound under control.

Chelsea were furious moments later when Robert Huth escaped any punishment beyond a free-kick for grappling with Willian, who appeared to be caught in the face by the German's hand.

But the visitors were celebrating moments later when Alonso put them ahead.

Azpilicueta's cross was miscontrolled by a sliding Pedro, but Eden Hazard helped the ricochet on to Alonso, who beat goalkeeper Kasper Schmeichel with a composed finish.

Leicester deployed wing-backs in an effort to counteract Chelsea's successful 3-4-3 system and they combined in the 18th minute when Marc Albrighton crossed from the right for Ben Chilwell to head over.

Leicester struggled for the cohesion to break down a well-organised Chelsea side and the hosts resorted to a desperate long-range effort from league debutant Wilfred Ndidi, which flew well wide on 29 minutes.

Nine minutes before half-time, a curling cross-shot from Vardy for Leicester forced Courtois into a scrambling save

Chelsea preserved their lead comfortably to half-time and doubled it six minutes into the second half.

Leicester only half-cleared a free-kick from the right and Alonso collected the loose ball, set himself and let fly with a firm shot.

His effort deflected off first Wes Morgan and then Danny Drinkwater to wrong-foot Schmeichel, who got a despairing right hand to the ball but could not keep it out.

Alonso tried for an unlikely hat-trick on 65 minutes when he met a right-wing cross by Victor Moses with a fantastic volley that flew a couple of inches wide of Schmeichel's goal.

Leicester abandoned their experimental 3-5-2 system and reverted to their more usual back four, but their hopes of a comeback were killed off with 19 minutes remaining when Pedro added their third.

The goal owed much to the Spaniard's delightful flick to release Willian and a little to good fortune after Schmeichel's save at Willian's feet only diverted the ball back onto Pedro's head.

The winger made no mistake with a simple finish.