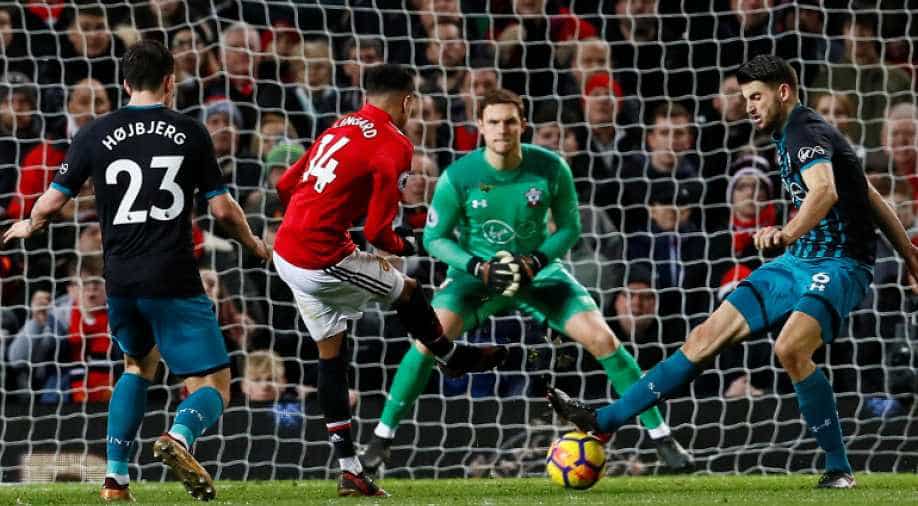 Manchester United put a smile back on Jose Mourinho's face as fine goals from Anthony Martial and Jesse Lingard sealed a 2-0 win over Everton, while Liverpool left it late to snatch a 2-1 victory at Burnley.

Martial started in the absence of the injured Romelu Lukaku and the United forward broke the deadlock in the 57th minute at Goodison Park.

Paul Pogba teed up Martial on the edge of the area and he stroked a sublime finish into the top corner for his ninth goal of the season.

Having struggled towards the end of 2017, United were more commanding in their first match of the new year and Lingard wrapped up the points with a superb solo strike in the 81st minute.

The winger beat several Everton players before curling home from 20 yards for his fourth goal in his last five appearances.

It was a welcome tonic for Mourinho amid reports the United manager is beginning to lose the support of his players after branding them "childish" and "immature" and admitting the squad needs major investment to catch City.

United moved back into second place in the Premier League after ending a frustrating run of three successive draws during the congested Christmas period.

"Our pride, our effort, everything was top class and on top of it we played very well. It wasn't a performance of tired boys, with the worst possible calendar," Mourinho said.

"Jesse is more consistent, he is adaptable, he is going in a good direction."

United are 12 points behind leaders Manchester City, who host Watford on Tuesday, and two points ahead of third placed Chelsea, who play Arsenal tomorrow.

With Philippe Coutinho and Mohamed Salah missing due to thigh and groin injuries respectively and Roberto Firmino left on the bench, Sadio Mane was the lone member of Liverpool's 'Fab Four' to start at rain-lashed Turf Moor.

Senegal winger Mane showed Liverpool can thrive without his star team-mates as he opened the scoring in the 61st minute, hammering home from the edge of the area for his eighth club goal this season.

Liverpool's third successive win extended their unbeaten league run to 13 games as they cemented their place in the top four.

"A very difficult game, the weather made it so hard, windy, rainy," Klopp said.

"This is one of the toughest places to play all season. Did we deserve to win? I don't care. We got the three points."

Stoke manager Mark Hughes faced calls for his sacking after a 1-0 home defeat against Newcastle.

Newcastle took a deserved lead in the 73rd minute when Ayoze Perez stabbed past Stoke goalkeeper Jack Butland from close-range.

That triggered chants for Hughes's dismissal from Stoke fans, with a 'Hughes out' banner held aloft in the stands.

Stoke have won once in their last six games and sit two points above the relegation zone.

Asked if he feared the sack, a defiant Hughes said: "Who else is going to do it?

"In terms of the knowledge of the group and the progress in my time here, I'm the best person to do it."

Claude Puel's side took the lead through Mahrez in the 53rd minute, the winger meeting Marc Albrighton's cross with a well-taken volley for his eighth goal of the season.

With Leicester striker Jamie Vardy sidelined by a groin injury, Islam Slimani who marked only his second league start this season with his first league goal since April -- a chipped finish in the 60th minute.